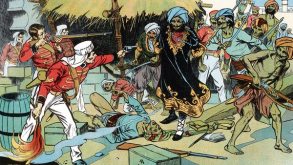 One of the favourite methods of execution espoused by the British after the great rebellion of 1857 featured brown people being blown out of cannons. The mutiny terrified India’s colonizers, and would soon lead to the replacement of East India Company rule with that of the Crown. But the answer to bloodshed—especially the killings of white women and children—had to be even more violence, for British authority would become tenuous if it couldn’t make a retaliatory statement. And so it was that in addition to hanging and other techniques, they chose this method of turning men into flying chunks of flesh. Indeed, as late as 1873, an official would endorse the option as eminently satisfying. “Blowing from a gun,” he offered, “is an impressive and merciful manner of execution.” It was quick enough for its victim to not feel the process but was also “well calculated to strike terror into the bystanders”. In a single blast, one could send a rebel to his maker, while also intimidating potential renegades through the attendant visual effects.

To be fair, the British were not being very original with such violent forms of public execution—it is merely ironic that while sticking men to guns, they also pretended they were in India to “civilize” its people. For a long time, Indian rulers had been familiar with means to frighten their subjects through violent public spectacles. The celebrated Velu Thampi Dalawa, an early 19th century Malayali icon who stood up to the British, is today enshrined as a freedom fighter. But he could be ruthless in power, and, as one historian wrote, his “utmost merit lay in the fact that he…inspired dread”. It certainly helped weed out corruption and persuade people to obey the law, because disobedience came at the cost of life or limb. Besides flogging and nailing men to trees, not to speak of cutting off their ears (as was done to a powerful banker), at least one person met with an even more horrific end—“his legs (were) tied to two elephants and the animals were driven in opposite directions, tearing the victim to pieces.” One can only hope the elephants were moving quickly.

As it happens, death by elephant seems to have been generally attractive to Indian kings, and, throughout the ages, many a criminal met his end under its crushing weight. Women, however, seem not to have been made subject to this ordeal—a Peshwa-era record in Maharashtra concerning a Brahmin lady discovered with a Muslim has the woman imprisoned while her lover is crushed. But there were other methods to inflict punishment too. The Sukraniti, a treatise ascribed to the sage Sukracharya, offers a veritable catalogue, as scholar Sumit Guha notes: “censure, insult, starvation, imprisonment, oppression, destruction of goods, expulsion…marking the body, shaving of half portions of the body,” as well as another old favourite of having the person carried on “ignoble animals”. This last option was seized by Muslim rulers too: In the 17th century, when Aurangzeb defeated his brother and rival Dara Shukoh, he had the latter paraded through Delhi on the dirtiest elephant he could find. A few generations earlier, a Vijayanagar emperor had provoked war with the Bahmani sultan of the Deccan by forcing the latter’s ambassador to go around on a donkey.

Another popular option was mutilation, because it marked people for life but did not terminate their existence. While Brahmins were exempt from many punishments, this one could be inflicted on them too—those Brahmins who conspired against Martanda Varma (whom we met last week in this column) were branded with hot irons and banished from the realm, alive but diminished. Non-Brahmins might lose an arm or a leg, if not life itself, while among Muslim royalty, blinding was recommended to emasculate political rivals. Firm punishment as a principle is wholeheartedly recommended in Kautilya’s Arthashastra also, in order to protect larger interests pertaining to the polity and its sovereign. As the historian of violence in ancient India, Upinder Singh, notes, Kautilya condoned torture as a means of interrogation—women were to be subjected to “only half of the due torture” though. But the methods listed are instructive: “striking, whipping, caning, suspension from a rope, and inserting needles under the nails.” Equally, transgressions of caste were to be dealt with strictly: If a Sudra had dealings with a Brahmin female, he was to be “burned in a straw fire”, which was only marginally better than the punishment prescribed for the man who seduced the king’s wife—“death by being cooked in a jar”.

None of this is to make a value judgement, of course, for until a few generations ago, power and violence went hand in hand—if one sought power, one had to be willing to exercise violence. And having gained power, one had to periodically demonstrate a capacity for brutality to sustain and nourish that power. Ashoka, for instance, is now enshrined as one of ancient India’s apostles of peace, but he too began his career, it is said, by having his chief rival roasted alive in public. Political rivals, in fact, could be got rid of through multiple methods in Kautilya’s world: assassination, poison, even magical spells. All this was legitimate—for instance, it was through assassins that Maratha ruler Shivaji accomplished the conquest of Javali. One rebel against the Peshwa, similarly, was partially burnt, had spikes driven into his feet, and was crushed to pulp by an elephant, with whatever remained being put on display for everyone to see.

All this was meant, at the end of the day, to cement authority and maintain order—social as well as political, not to speak of personal where princes were concerned. Indians understood the principle well, so that long before the British started blowing people out of cannons, they had already popularized that method—and worse. For, as the ancient legal manual Manusmriti puts it, “Punishment alone governs all beings, punishment alone protects them, punishment watches over them while they sleep…. The whole world is kept in order by punishment, for a guiltless man is hard to find.”