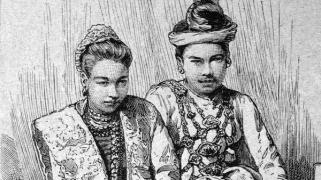 In the summer of 1944, a white man showed up in the coastal town of Ratnagiri to explore the former residence of a political personage. The “two-storey building of local laterite and lava rock,” John LeRoy Christian noted, was easily “the finest building” in town—a tiled structure befitting the rank of the man who once lived there. He then made his way to the home of the late occupant’s daughter, discovering here, however, a “simple Indian stone house with…only the most essential furniture”. To the old lady within, her visitor presented a bottle of lemon drops, and she reciprocated, as was appropriate, with an offering of her own. And so it was that this stranger from overseas received from the exiled princess of Burma a right royal present of two Ratnagiri mangoes.

When King Thibaw of Ava beheld his first daughter in 1880, there was no indication that this “Exalted Senior Mistress of the Head Group of Goddesses” would die impoverished and alone 67 years later, by the shores of western India. But then Thibaw himself had little inkling of what awaited him. He came to power through palace intrigue and lost it a few years later after a hopeless war against the British. His father, King Mindon, was an icon, and had other plans for the succession—Thibaw, his 41st son, was not the most appealing of heirs. But Mindon’s queen locked up most of Thibaw’s rivals and ensured the 19-year-old took the Lion Throne. A three-day-long massacre followed, and Thibaw’s relations were slaughtered, in keeping with a bloody tradition. Of course, to prevent the cries of the royal victims from offending his ears, loud dramas were staged, drowning out the sound of death.

It was a world of obsequious splendour over which the king now presided (he had 100 slipper-bearers and 60 “bearers of the royal betel box”) but it was not a world he would enjoy for long. In 1826, soon after the First Anglo-Burmese War, several provinces had been ceded to the ascendant British, besides the port of Rangoon. The Second Anglo-Burmese War in the 1850s led to the loss of more territory, so that Lower Burma became a British colony, the royal family controlling the rest from their capital in Mandalay. The massacre of the king’s relatives now supplied moral outrage to annex even Upper Burma and between 1879-85 relations between the court and colonial authorities cooled steadily. Even without murder, they had other reasons to depose the king—he flirted with the French, for instance, and could thwart what the British imagined were their rightful commercial prerogatives.

In 1885, the British issued an ultimatum, acceptance of which would have meant foreign rule in all but name. Thibaw’s principal wife and half-sister —Supayalat, daughter of the regicidal queen mentioned above, and the real force behind his throne—insisted they fight. After all, even if defeat was certain, at least there was honour in losing a war. The result was the rout of royal forces, and, by November 1885, British troops were in the capital. Thibaw and Supayalat received them in state, trying to maintain the one thing they had left: a stoic dignity. Even as his servants and townspeople ransacked his palaces, the king was informed he would be shipped abroad. And, just as decades earlier the British had parcelled the Mughal emperor from Delhi to Burma, the last king of Ava was put on a bullock cart and packed off to India.

The next 30 years of Thibaw’s life are captured with great empathy by Sudha Shah in her meticulously researched The King In Exile (2016). It presents yet another case of a ruler divested of power and fighting for shreds of respect against a largely obdurate colonial establishment. At first, Thibaw and his family were parked in Madras (now Chennai), where the ex-king (demoted from “His Majesty” to “His Highness”) had his third daughter. And then, on a pension of ₹3,000, the family was settled in Ratnagiri, chosen because it was “well off the beaten track…(and) lacked any railway connection” that would make visits of sympathizers easier. Thibaw hated the place but there was no question of going back—while periodic raises were granted, the British saw him as a potential icon for nationalists at home. Indeed, even when in 1894 a transfer to Madras was proposed, the chief commissioner in Rangoon, opposed the idea, arguing this would cause “trouble in Burma”.

And so Thibaw wasted away in Ratnagiri, “a very unpleasant place to live in”, he wrote, full of “snakes and scorpions”. His expenses—much of it religious—led to endless debt, even as he petitioned the British for the return of valuables he had entrusted to them when surrendering his former capital (including a celebrated ruby, never seen since). His wife was initially resolute: She smelt conspiracy everywhere, Shah notes, and taught her daughters to cook, certain that they would be poisoned otherwise. But, by 1900, bogged down by their fall, she was in the grip of depression. Denied regular social contact, and policed and watched, their daughters too grew up lonely—the princess who in 1944 gave mangoes to her visitor began an affair with their Maharashtrian gatekeeper, her love child later marrying the family’s dog-walker. This granddaughter of the last king of Burma would one day transform herself from TuTu to Baisubai, selling paper decorations in the local market.

For Thibaw himself, there were many indignities to confront, chief of which was death in exile. At the end of 1916, the ex-king died soon after his second daughter eloped with a secretary. Not even his remains were allowed in the country where he was once sovereign. So it was in Ratnagiri that he was entombed, the only immediate consolation being a notice his youngest put out on the gate: “The Great King of Righteousness,” she announced, “has wearied of the world of men and ascended (therefore) to rule among the Gods.” And then, a few years later, the family was at last permitted to leave, going back to the land where their ancestors were once kings—that is, till the princess who loved the gatekeeper returned, destined to spend the rest of her days in a tiny cottage, alone and forgotten, near the grave of her broken father.