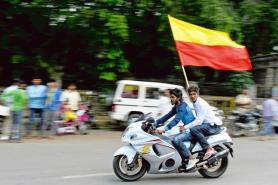 It took several decades and as many lifetimes for India to win independence in 1947. But the journey was all the more exacting for having to marshal Indians together for a common cause, above multiple identities and layers of difference. Despite romantic memories of civilizational unity expressed in our ancient epics, the stark historical reality was that Delhi had more in common with Kabul than it did with the south, and that Kerala was more familiar with Arabia than it was with fellow “Indians” in Karnataka. Brahmins, who learnt Sanskrit and venerated the same texts, knitted some common threads throughout the subcontinent, but in Varanasi alone there were dozens of varieties of this class, and their everyday practices mutated from region to region—while most Tamil Brahmins grew their tuft of hair at the back, the Malayali Brahmin wore it in the front; where Iyengar women saw white as the colour of widowhood, the Namboothiri bride wore nothing but white to her wedding pavilion.

What arguably united such stark diversities of people was the common enemy they all confronted in the British and the unambiguous damage inflicted on India by the Raj. As someone once remarked, “It is not so much sympathy with one’s fellows as much as hostility towards the outsider that makes for nationalism.” And so, over a period of time, we evolved a sense of common feeling rooted in a fight against prejudice and for political autonomy. We were able to rise above difference (avoiding, however, as B.R. Ambedkar lamented, painful but necessary internal reform) and focus on expelling the colonizer. And when the process inspired positive moral confidence, it became compelling enough for V.D. Savarkar to even claim that a sentiment of brotherhood had always run “like a vital spinal cord” through the land, making “the Nayars of Malabar weep over the sufferings of the Brahmins of Kashmir”—when in all likelihood the Nairs had little knowledge of where precisely Kashmir was or what its Brahmins were doing.

The departure of the British, however, withdrew the enemy from our horizon—we now sought renewed vision to sustain national feeling against smaller, but more convenient, local options. Jawaharlal Nehru plastered the slogan “Unity in Diversity” on walls and in textbooks, and brought into force a Constitution that respects, and indeed celebrates, difference. The principle was that we could all continue to embrace our various identities—Gujarati or Santhal, Muslim or Zoroastrian—while staying wedded to the national consensus that is India. “We have made Italy. Now we must make Italians,” a 19th century European statesman had remarked, but in 20th century South Asia, Indians arrived in all shapes, colours and languages, united, not divided, by pluralism. Of course, this was always the ideal, and from the starting moment various forces chipped away at it, sometimes even employing instruments of state power. Pluralism too was often a romantic smokescreen for bleak realities.

The real challenge to pluralism, however, has come from those who promote a more orthodox vision of nationalism, though, ironically, they had little to do with the battles for freedom. “Such identity,” historian Romila Thapar notes, “tends to iron out diversity and insists on conformity”—in other words, pluralism is weakness. In this new vision, there must be one paramount “Indian” nationalism—us or them, not us and them—and this is offered in that all-too-familiar shape of Hindu majoritarianism. In 1881, the census declared Hindus “a Socio-Political classification” that included “the whole of the people who recognize caste”. For neo-nationalists, however, the formula to cement strength is a particularly reactionary perversion of Hinduism. A tradition that is a fascinating “mosaic of distinct cults, deities, sects and ideas” (including contradictory ideas) is being regimented to address contemporary needs, and nationalism must follow this pattern of one definition, one form, and one loyalty.

Naturally, this calls for a new structure and a new vocabulary of Hindu identity, featuring certain sacred books, fewer gods, and a standardization of practice that sometimes goes against India’s own manifest heritage in its quest to service an overarching, recently invented cause. So we must all be Hindus who do not eat beef (though several castes happily did in the past) and should avoid meat in general (though a number of Brahmin communities too are non-vegetarian). Our nationalism must have a fixed language—Sanskrit is ideal but in the interim, Hindi will do. And then dress codes, social behaviour, and much else must also fall in line, creating more a sharp machine to negotiate aspirations (and nurse insecurities) born of modernity than an organic people who live, breathe and prosper. The former offers efficiency, the latter is slow and chaotic—we are told we must choose, or we must go.

One-size-fits-all rules, however, have an endearing tendency to backfire in India. And 70 years of officially promoting diversity means that attempting to reverse the flow and manufacture a narrow brand of nationalism will provoke challenges if not long-term disaster—where, for instance, Hindi nationalism is force-fed from Delhi, the powers in Karnataka respond with a Kannada-oriented sub-nationalism that would even like its own flag. If the idea is to create an “us or them” with the “majority” on one side, and the minority as the enemy within, the architects of this scheme will discover too many “thems” sown into the fabric of the majority itself.

The historical lesson is clear—there was a reason why in 1947 we prevented nationalism from distorting into an ugly political beast, and envisioned it as a more malleable reflection of our multiple realities. Now to re-engineer this mature, long-standing policy in black and white will only prove calamitous, showing that far from making in India, what we will end up doing is breaking India.