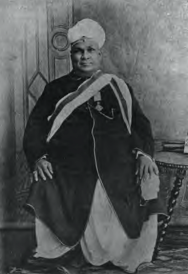 In 1892 a strange event transpired in princely Pudukkottai, causing a sensation in the corridors of imperial power. The maharani of the state, Janaki Subbamma, had ordered a special sacrifice of “one hundred cobras hung by the tail” over a fire. While sorcery was not unusual in Indian courts—in the 17th century, the ruler of Madurai deployed it against the Vijayanagar emperor, for instance—the difference was that the British were now watching. Their sentiments about the maharani were already negative: A few years earlier, after she prevailed upon her daughter to claim they were all about to be poisoned by their minister, she was described as a “thoroughly dangerous and intriguing woman”. But Janaki Subbamma was not cowed, and as she saw it, her enemy entirely deserved the fate that a serpent sacrifice was expected to bring about.

As a student in 1840s Madras, Sir Seshiah Sastri could not have dreamt that he would one day be at the receiving end of black magic or that his staunchest opponent would be a maharani. The fifth son of a Brahmin priest, it was his luck that an uncle plucked him from their village and enrolled him in a mission school. When some fellow students took the message of their teachers seriously enough to denounce their Hindu origins, Sastri was moved to a new institution by his family. It was a turning point in his life—he would now obtain an English education, and before him opened up the possibility of achieving that coveted thing: full-time employment as a government clerk. By 20, he was in a “sirkar” office, and with it came a steady salary of ₹12 and a half, a guaranteed pension down the line, an opportunity to lift his family out of their drudgery, and, most importantly, upward mobility.

In the mid-19th century, clerical positions were of great significance to Indians. Not only had the British organized new systems of governance, which had constant need for bureaucrats, but colonial officers were also redefining power in princely territories—British agents in these courts would bring along a train of English-speaking Indian clerks to aid them in their stated quest of imposing “progress”. They were, in a sense, collaborators of the Raj, but the process also placed Indians in posts of much influence over time. Sastri’s schoolmates, all of whom were initially clerks, included T. Madhava Rao and V. Ramiengar: all three, celebrated as “native statesman”, became chief ministers to Indian maharajas. The locus standi of the Raj was that the British were in the subcontinent to “civilize” it, but these brown men, despite acquiescing to the imperial rulebook, proved that Indians, too, could rule.

Sastri was based in Masulipatnam, having become tehsildar (sub-district head) at the age of 23. He handled law and order, tax matters, religious disputes, and even opened a debating club. But Sastri and his ilk also represented a shift in power from traditional local middle castes into the hands of a mobile, British-sponsored Brahmin bureaucracy: a dynamic that would provoke protests about “Brahmin dominance” in due course. But equally, his fellow Indians and he also smashed glass ceilings. When Sastri was appointed head sheristadar (district head), Madhava Rao wrote with delight: “I was rejoiced to hear that so early you are in the highest post accessible to natives in the Revenue line. There is not the least doubt that you deserve…far higher. Perhaps and probably, you will be the means of opening to our countrymen the higher walks of the service. You are probably destined to enter them first, bidding your brethren to follow you!”

By his mid-40s, Sastri was prominent enough to succeed Rao as minister in Travancore, on a magnificent salary of ₹2,000. Gone by this time was the mind that once saw clerical work as the height of ambition—he now harboured clear ideas of “progress”, government, and even how Indian princes should behave, in a mix of Brahmin orthodoxy with Western modernity. Sastri’s tenure in Travancore was successful but his relations with the ruler soured: The latter saw areas his minister was keen to dominate as an infringement of his royal prerogatives. Next, he moved to small, almost bankrupt Pudukkottai. As Sastri himself wrote, “Misrule had led to the ruin of (the state)” and things were “on the brink” when he began his 16-year stint. He pleased the ruler by getting him upgraded from “His Excellency” to “His Highness” but from the start found it difficult to deal with the maharani.

Things reached a head after 1886, when the maharaja died and Sastri became regent for his heir. While his administrative capacities were strong, his notions on how the royal family should act put him at war with the maharani. For instance, like the Victorians, he did not approve of devadasis serving Janaki Subbamma; for the latter, however, these literate “public women” were the eyes and ears that linked her to the outside world. He dismissed the maharani’s views on preserving old ways as superstition; she countered that to “meet me with the plea that my objections are untenable because they are superstitious is a dangerous…slip from the domain of sentiment to the domain of religion”. Their views on how the boy-prince should be raised also clashed: Sastri wanted an Indian ruler who married West to East in idealized harmony, while to the queen modernity was a creeping encroachment to tame her family.

In the end, both failed. In 1894, the English-educated heir was enthroned, and while the maharani wanted him entirely Indian and Sastri sought an Anglo-Indian blend, he proved himself altogether Western in all but skin. The grand old minister’s only consolation, perhaps, was that he didn’t live to see the worst: A little over a decade after Sastri’s death in 1903, his protégé shocked even the British by marrying an Australian. Obtaining a handsome pension, he abandoned Pudukkottai—in the process rebelling against the bureaucrat who tried to define him, as well as the queen who sacrificed serpents in a quest to “protect” him.