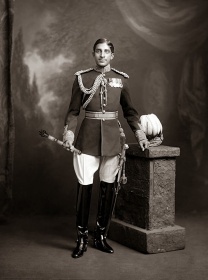 In January 1925, Malabar Hill in colonial Mumbai witnessed a crime that would topple one of India’s most prominent maharajas. A wealthy businessman called Abdul Kader Bawla was in transit with his mistress, Mumtaz Begum, when their car was forced to halt by another vehicle. A few men emerged from it, and before anyone knew what was under way, shots were fired and a knife was slashed about. The assailants were seeking to drag Bawla’s beloved into their car, but a few British military officers returning from a morning of leisure came to the bleeding lady’s defence. Beating back the would-be kidnappers with golf clubs, they rescued Mumtaz. But it was too late for Bawla—though he was taken to hospital, he succumbed to gunshot wounds.

The attempted abduction of Mumtaz Begum caused a sensation, occupying prime real estate in assorted newspapers for months on end. To begin with, the victim was a man of note, with a fortune of ₹4 million, out of which he left the pregnant Mumtaz a substantial bequest. Then, the identity of their assailants: Nine men were named by the police, all curiously connected to the princely state of Indore. One was a risaldar (commander of a cavalry unit), for example, while another was a driver. A third was a mankari (nobleman) at the maharaja’s court, and, since October 1924, the men had been watching Bawla and Mumtaz, under orders, it was reported, of the adjutant general of Indore’s army. For 24 days, the case was heard in court, at the end of which the murderers were pronounced guilty.

But while the adjutant general was on paper the force behind the conspiracy, “is he”, demanded The Times Of India that March, “the ultimate source!” For the air was thick with rumours that the real mastermind of the failed abduction (but successful murder) was Tukoji Rao Holkar III, the maharaja himself. After all, the judge who tried the guilty too had alluded to the fact that there “may be other persons who were interested in kidnapping Mumtaz”, and that Indore was “the place from where the attack emanated”. That the convicted men had the best lawyers fighting for them at great expense further raised the question of who was spending so generously to have them acquitted. As the Times added in a report in October, “Only a very wealthy man… (or one) deeply interested, possibly deeply compromised, in the crime would consent to spend money as freely as has been done.”

Right from the start, the press had seized on Mumtaz’s antecedents. As one commentator put it, lust could not have been what provoked the attempted kidnapping because nobody was “much impressed with her beauty”. This led to speculation that revenge was the actual motive, and, as more of her tale trickled out, the gossip was confirmed. The great-granddaughter of a courtesan in Sikh emperor Ranjit Singh’s establishment, Mumtaz was a “singing girl” who in her adolescence performed for the Indore maharaja. Soon, she became Tukoji Rao’s mistress, in which position she more than once became pregnant—their daughter, she alleged, was murdered. Addressed in Indore and abroad (for she travelled with the maharaja to Europe) as Kamalabai, she lived for about a decade at court before deciding she had had enough. Meant one day to travel to her master in Mussoorie, the young woman got off the train in Delhi and fled.

Almost immediately, the maharaja’s government attempted to have her extradited from British territory on charges of stealing state jewellery (a charge she denied, arguing that the jewels in question were her family property, presented by Ranjit Singh). Making full use of the colonial laws that gave her protection from her former patron, Mumtaz came instead to Mumbai and commenced a relationship with the ill-fated Bawla. It was this that provoked the ire of her ex-master—who already had a reputation as a somewhat vindictive man, ill-treating his maharani Chandravati Bai—and so, the papers insinuated, was put in motion that “diabolical” plot to liquidate Bawla and repatriate Mumtaz. By the end of the year, in fact, talk of Tukoji Rao’s culpability had become loud enough for the Servant Of India to carry the headline, “Put Him On His Trial”.

By now, the colonial establishment had become increasingly uncomfortable with these reports, and the Indore government’s overreaction did not help. On the one hand, the maharaja’s officers began to engage in a war of open letters with the press, which, far from deflecting attention, kept their ruler under a scandalous spotlight. Denials of all the “wild theories” were followed up with dubious internal inquiries where, very conveniently, “no one came forward to give any information”. That the murderers of Bawla were Tukoji Rao’s employees was not denied. But just because “some of (his) officials were found implicated”, it was stated, the maharaja could not be held responsible for their crimes. Meanwhile, despite his seeming nonchalance, there were reports that the ruler was secretly consulting formidable lawyers like Sir Tej Bahadur Sapru and Sir Sivaswami Iyer.

In the end, the British government decided to proceed with action. Over a year after Bawla’s murder, and with the press baying for royal blood, they issued notice to the maharaja. He could either accept a commission of enquiry or abdicate “voluntarily” to save face. In February 1926, the maharaja presented his response—he would give up the throne “on the understanding,” he wrote, “that no further inquiry into my alleged connection with the Malabar Hill tragedy will be made”. Days later, his son was enthroned in Indore, and, by the end of March, the ex-maharaja was on his way to Europe, where he would meet an American heiress, destined to become his newest maharani. His old lover, Mumtaz, meanwhile watched her tale incarnated on screen in a silent film called Kulin Kanta, after which, it is believed, she set out for Hollywood. That, however, is another story.