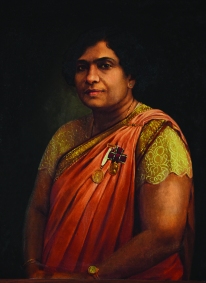 In July 1926, the secretary to the pregnant maharani of Travancore received a letter from his royal mistress’ doctor. Sheds, wrote M.P. Lukose, had to be erected on the palace premises—one, fully furnished, for the surgeon who would deliver the maharani’s baby, and two for another doctor and nurses. An extra tent would also need to be raised where officers of the state could wait for news on the royal delivery—after all, a 21-gun salute would need to be fired to honour the new arrival, and alert the press. A list of items in precise quantities was also forwarded: six yards of silk to wrap the newborn in, for instance, and exactly 12 bars of Vinolia Otto soap for the mother and 12 of Pears for the child. The baby was only due a few months later, of course, but since on “the last occasion”, complained the doctor, “the sheds were not ready in time”, the request now was being made well in advance.

By 1926, Dr Mary Poonen Lukose was already well on her way to becoming something of a legend. Not only was she the first female Malayali graduate, she had also gone on to study medicine in London and Dublin before joining the princely state’s health services. It was not easy: She had wanted to study science in college, but this was barred to women at the time, so it was after acquiring a bachelor of arts degree that she went abroad to pursue medicine. Working against the odds, however, was not unusual for one in her position: In the 1870s, her granduncle had returned from his studies in England, expecting he would find a senior official position. On the contrary, he was turned away: In Travancore, the man was told, all relevant positions involved temple duties of some kind, with the result that there was an effective ban on Christians serving in government.

But by Dr Lukose’s time, things had started changing. Joining the medical department in 1916, she was finally allowed to shine when Travancore found itself under the rule of a princess. In 1924, soon after maharani Sethu Lakshmi Bayi came to power, not only was Dr Lukose elevated as head of the medical department—making her de facto health minister—she was also nominated to the state’s legislative council. In other words, well before Muthulakshmi Reddi (recently celebrated in a Google Doodle and often erroneously described as India’s first female legislator), Dr Lukose had already started taking part in legislative affairs. Such sensation did the maharani’s decision cause, in fact, that The Madras Mail published news of the event under the heading “Feminism In Travancore”. When Dr Lukose first attended council, the entire gathering broke into spontaneous applause.

It was all well deserved. Leaving home in 1909, she had been largely on her own in London for years. In her memoirs—a good chunk of which appear in Manorama Books’ recently published tribute, Trailblazer, compiled by Leena Chandran—she highlights the wonder and alarm she felt in equal measure. A traffic policeman was a complete novelty for her, while elsewhere it was she who became a curiosity: Visiting friends once, she had to disappoint a child, who, expecting a Native American, cried, “But daddy, she has no feathers in her hair!” Even while she spent extra hours studying—for she was an arts student switching to science—she expressed awe at the colour of English apples, and horror at the prospect of high heels. And, of course, occasionally, like students even now, she rebelled, going out despite hostel curfews and sneaking in after evening parties. She developed also a certain strength of character—when she was still abroad, she lost her father, and she could then rely on no one but herself.

One particular skill acquired by Dr Lukose during her years abroad, however, would help her. She trained as a midwife and spent hours outside class working in Dublin’s slums, in conditions so horrifying that sometimes she and her colleagues would feed their patients’ starving older children. It was an experience that would come in handy in India, where only the most rudimentary facilities were available to women. After her appointment as head of the medical department in Travancore, for instance, one of the first things Dr Lukose did with the maharani’s blessings was to set up classes to train midwives. The results were most satisfactory, in that by 1927 these women’s services were being requested even in villages, and one-tenth of all births in the state were handled by professionals. A cooperative scheme was designed, whereby the government created rural dispensaries: By 1929, 1.6 million of the five million subjects of Travancore had access to modern medicine. Meanwhile, as early as 1920, Dr Lukose had delivered Kerala’s first C-section baby.

Despite gender and race politics (which saw her fight salary discrimination), as well as communal complications (suspicious Nair officials considered her part of the “Syrian Christian Triumvirate” which influenced the maharani), Dr Lukose built a remarkable career: Becoming surgeon general of Travancore, she was honoured with the title Vaidyasastrakusala, and, by 1947, was a senior enough public figure to dine with the British viceroy. In 1975, the Indian Union would also award her the Padma Shri. Her personal choices were just as interesting and unorthodox. She married, for instance, a man younger than her, and though he would one day become a judge, she outranked her husband for a long time. She would lose “Judgie”, as she called him, relatively early, and outlive her two children. But she accepted personal loss with dignity and carried on. Until, of course, in October 1976, 50 years after she had delivered Sethu Lakshmi Bayi’s royal baby, Dr Lukose breathed her last, having proved long before that she was, truly, a trailblazer.