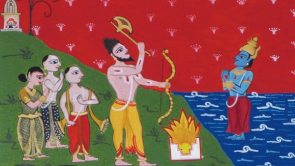 At the dawn of the 20th century, a scandal of horrific proportions reared its head before Kerala’s Brahminical elite. The year was 1905 and the setting was princely Cochin. Home to prominent Namboodiri families, this was also one of India’s principal seats of orthodoxy. The Namboodiris were fond of rules and ritual, perched though all of this was atop extraordinary social privilege. As E.M.S. Namboodiripad put it, these Brahmins “occupied the highest position among all other communities…collected fabulous amounts as rent, enjoyed undisputed supremacy over the tillers of the soil, and maintained intimacy with the ruling monarchs”. The immortal Parasurama, they claimed, had bestowed Kerala upon them, this being the fount of their legitimacy. Every other group was to serve, the Namboodiris apportioning caste status and privilege to those who subscribed to this world view. As late as 1875, the Brahmin was officially cast as the common folk’s “royal liege and benefactor, their suzerain master, their household deity”, and indeed, “their very God on earth”.

While colonialism began to chip away at this cocoon of ritual and luxury, one of the earliest cracks in the order appeared not outside, but within—in the quarters of a woman. Namboodiri women, after all, saw little of the privilege so routine for their men. The only Malayali women in purdah, they had no freedom of movement, no ownership of property, and little education. Or, as one of them put it, the antharjanam (literally, “indoor person”) was “a jailed creature”. She was “born crying, lives her life in tears, and dies weeping”. It was not an exaggeration. Even marriage—the only prospect for women in a patriarchal set-up—was denied to many of them. Among Namboodiris, there was no rule decreeing early marriage for girls, while only the eldest male was permitted to take a Brahmin wife. The result was that younger sons married non-Brahmin women, while legions of Namboodiri females lived in sequestered spinsterhood. And if they did find husbands, it was often already married men, who used the opportunity to exchange their own sisters and daughters as though this were a transaction for chattel.

In 1905, however, the world of the elite was shattered by our protagonist, since enshrined in Malayali imagination as a pratikara devata, goddess of revenge. Her name was Savitri, and she lived in the Kuriyedathu house in Thrissur district. Married at 18 to a man whose brother had sexually abused her at 10, she took it upon herself, it is said, to unleash fury upon her caste and its leaders. While Namboodiri men took wives and mistresses, the antharjanam was to be chaste and docile: It was this presumption that Savitri would demolish. As Malayali social critic V.T. Bhattathiripad put it, she challenged male sexual entitlement “with the same weapon”—she slept with men other than her husband. There were high-caste men, and there were lower-caste men; there was her brother-in-law, as there were other relations; there were Tamil Brahmins and Nair aristocrats. There was even a Kathakali star, not to speak of an epileptic. By the time her deeds were revealed, occurring in her chamber as much as the temple grounds, Savitri, then 23, had been with no less than 65 men.

It was a scandal unparalleled, because it was the first such disseminated widely through the newspaper press. There was a traditional round of interrogation by her caste men, but the furore caused the local maharaja to order a second round in his palace. Various theories circulated: As scholar J. Devika records, one of these placed Savitri as the pivot of a cunning plot hatched by the ruler. She was apprehended for fewer lovers, but prevailed upon to name many more, to get rid of an emerging class of Namboodiri modernizers challenging the orthodox old guard. But what shocked all involved—and the public witnessing—was her reported coolness. Or, as the Malayala Manorama put it, “She replied like a barrister.” For she had evidence of her trysts. She knew what marks her partners had on their persons, or if there was a wart on their genitals. She remembered dates on the basis of festivals and events, and one by one she named them—great exemplars of contemporary society, all guilty of fornicating with a Brahmin wife.

Cast as a victim seeking vengeance, Savitri has been reincarnated in fiction as well as film. Lalithambika Antharjanam retold her tale, and Matampu Kunhukuttan—whose Outcaste has been just reissued in Vasanthi Sankaranarayanan’s translation from Aleph Book Company—too describes this heroine who paid patriarchy in its worst coin. But there are others who seek nuance. She was certainly a victim, many of her “affairs” occurring when she was only an adolescent. But the emphasis on a calculated quest for revenge was perhaps an exaggeration by voices championing reform, the scholar Rajeev Kumaramkandath suggests, seeking to use these events to force change. Savitri herself had more complex experiences, as her testimony reveals. A mahout, for instance, had a bottle of rosewater she wanted: He had heard of her relations with another mahout, and offered her the bottle if she would sleep with him too. Savitri agreed. Elsewhere, she slept with a man fearing he would divulge her involvement with a third person—it was fear of blackmail that motivated her here, not necessarily a desire to ensnare more men in a web of revenge.

Still, there is in her meticulous recollection of each tryst something formidable. So too in the fact that when she was excommunicated, she took 65 men with her. All of Kerala seemed to savour the blow she dealt her community, while champions of change rejoiced at the exposure. “It is indeed a sight to watch the indomitability on their face when (the men named) go to question the woman,” it was reported, “and the grief-stricken expression when they come back.” In the years that followed, Namboodiri women began to reject their seclusion; men began to breach custom. Savitri herself disappeared into Tamil country, never to be seen again. But, in her wake, she left horror and admiration both, casting the first stone at the house of orthodoxy. No longer was the Brahmin a veritable god on earth—he had been tainted, his pretensions dismantled by a woman who was beyond shame and fear.