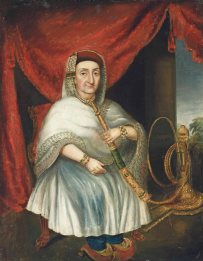 In the summer of 1795, soldiers attached to a Mughal jagir in present-day Uttar Pradesh rose up in mutiny and chained their commander-in-chief to a gun carriage. It was the nadir of their ultimately foiled enterprise, but the whole episode was packed with extraordinary drama. To begin with, the commander-in-chief—who languished for a whole week in the heat—was a woman. She had launched her career as a dancing girl, rising not only to become the begum of Sardhana, but also to win the affection of the emperor in Delhi who styled her Zeb-un-Nissa (“Jewel among Women”), Farzand-i-Azizi (“Beloved Daughter”) and Umdat-al-Arakin (“Pillar of the State”). She had spent her youth by the side of a much older German lover, inheriting his fortune, and later joined a Frenchman in a doomed marriage. Now, as she lay shackled and humiliated in public, riding heroically to her rescue was a former Irish paramour, one who would title himself the “Rajah from Tipperary”, becoming famous for his own military exploits.

Begum Samru, as our protagonist is best known, was born in the 1750s to the junior wife (or mistress) of a petty Mughal nobleman. The early death of her father saw both mother and child turned out on to the streets, and by the time she was in her teens the part-Kashmiri girl, who would one day take the name Joanna Nobilis, was a courtesan in Delhi. It was at this time that she encountered Walter Reinhardt. A serial deserter turned mercenary, he had upset everyone, including the French and the British, the latter placing a bounty on his head after he presided over the massacre of dozens of Englishmen in Patna. Known also as Sombre, a French corruption of Somers (a name he assumed while attempting a cunning reincarnation), he readily added the dancing girl to his entourage. And before long, despite the existence already of an Indian bibi, this young girl had become his partner, living with him for over a decade, sharing in his numerous adventures.

This period with Reinhardt, in fact, transformed the begum. Accompanying her “husband” on military campaigns, she also became his right hand in managing his jagir. After Reinhardt’s death in 1778, she played her cards with uncommon shrewdness, having Delhi recognize her, and not her husband’s hopeless son, as heir to his estate and all its appurtenances. Even though her dead spouse’s reputation as the “butcher of Patna” continued to plague her for years, she won admirers across the board; all of them noted her determination, charm and store of wisdom. Indeed, successive commentators recorded her “masculine” gifts, which, in that patriarchal age, as Julia Keay wrote, was their highest compliment. The begum too encouraged such an image: She sported, unusually, a turban, also appearing unveiled in paintings, with a hookah pipe in her hand. Essentially, she was making, as Alka Hingorani argues, “subtle alterations of traditionally masculine prerogatives”.

In 1781, Begum Samru took the unusual step of converting to Catholicism, an act as much of religious conviction as of political imagination. Though she shared no tongue with the priest who baptized her, and despite disapproval for having retained an Islamic appearance even after her conversion, the begum spent lakhs of rupees on Christian institutions (besides exchanges with the pope), constructing also what is considered north India’s largest church. All the same, becoming a Christian seemed a suitable strategy for a woman unhappy with Islamic restraints on her sex: Catholicism gave her the freedom she required to rule Sardhana while creating a legitimate (and distinct) space in contemporary Hindustani politics. Some, in fact, claim that she foresaw British dominion and wished to curry favour with India’s future masters by accepting the Christian faith—a claim not borne out by evidence, even if it lends itself to heady speculation.

As a military commander, Begum Samru showed all the qualities that marked leadership in her tumultuous age. When it was necessary, she could be ruthless: Two maidservants who set fire to her buildings were buried alive at her orders. When the Mughal emperor was imperilled, it was she who rode more than once not only for the defence of his imperial person but also of his capital. All the same, the begum also had to balance factions within her own armed forces. A motley crew of European adventurers and assorted Indian sepoys, they had their own politics, the worst of which the begum suffered after she married an unpopular French gun-founder, provoking that mutiny which saw her tied up and left to die in scorching heat. She survived the debacle and was restored to power, but never again permitted her heart to reign over her head.

By the early 19th century, the middle-aged begum (“a bejeweled vision of delight”) became a British ally. Instead of military engagements, it was her soirées that now attracted Europeans for whom she was also an object of curiosity. As late as 1834, when she was “bent in two” and “shriveled like dried raisins”, her energy didn’t cease to dazzle. In fact, writes Brijraj Singh, she actively “preferred European people and things to their Indian counterparts”—a potential adjustment to altered political realities after the emperor and his dynasty went into terminal decline and British supremacy became India’s new normal. Of course, though they admired her, Company officials never saw her as an equal. But it didn’t matter to her, either, in the big picture: She had begun life in poverty and crisis and worked in a public house. Now, by the eve of her demise, she not only enjoyed military salutes, but was also one of India’s richest women. As her memorial in Sardhana records, then, when “Her Highness Joanna Zeb-ul-Nissa” died on 27 January 1836, she was “revered and lamented by thousands of her devoted subjects”—not a predictable ending for someone who was once a courtesan, and whose successes so bewildered the world that rumour insisted she was actually a witch.