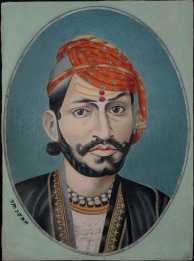 In 1857, when the great rebellion swept much of north India into a storm of gunpowder and rage, one of the consolations the embattled British possessed was the loyalty of numerous Indian princes. Even as maharajas issued proclamations of fidelity, a number of them mobilized actual armies in service of the East India Company. Thus, for instance, leading princes of Punjab stood with the British, just as the reigning Scindia in Gwalior “strove hard to keep his…subjects faithful to his liege lords.” In Rajputana, similarly, support came despite public sympathy for the rebels. “At every town through which we passed,” an officer wrote of Jaipur, “the inhabitants cursed and abused us.” But the local ruler pitched his flag with the British, lending them troops who not only served the Company gloriously but even punished those “refractory villages” for flirting with mutiny.

From his position, it was a shrewd stand to take, for had it been otherwise, Sawai Ram Singh II of Jaipur himself might have been deposed and banished to the footnotes of history. Described as “a ruler of singular intelligence and enlightenment”, Ram Singh was only 22 at the time of the rebellion, and it was after some hesitation that he decided to endorse the cause of the British. He had spent his formative years under the guardianship of a regency council, which was really a coterie of noblemen. When in 1851 he succeeded to full powers, he had to balance several interests—in order to actually exercise his authority, he proactively sought the “active official support” of the British. But all the same, his courtiers remained influential, so when they showed sympathy for the rebels in 1857, it took some time for Ram Singh to make up his mind—on whether he should raise swords in the name of the mutineers, or fight for a foreign power which buttressed his own princely authority.

Ram Singh was one of the 19th century’s more remarkable Indians. That he was interesting was clear early on. When prince Alexei Dmitrievich Saltykov of Russia met him in the mid-1840s, the “plain-looking” adolescent left on his visitor a sparkling impression. He wanted to know, for instance, “where Russia is located and how long it would take to go there from Jaipur”. As an adult, the maharaja carved for himself an even more striking reputation as a modernizer. In 1867, he set up the first girls’ school in his capital despite “popular prejudice” against such ideas in a feudal environment. He set up the Maharaja College, where English and Sanskrit were taught side by side, even as he established a school of art, a public library, and a hospital. Gas lights were installed along thoroughfares in his capital, while other projects ranged from waterworks to a postal network. Changes in administration were also made, launching modern governance in the state. Meanwhile, fluent in English as well as Western thought, Ram Singh became a bridge between two worlds, tuned into evolving times, but also married firmly to his roots and to Indian tradition.

What really distinguished him, though, was a royal pastime that graduated into an enduring passion. When Louis Rousselet, the traveller, met Ram Singh in 1866, he was surprised that the maharaja’s “dress was handsome, but showed an indifference to ornament”; instead of jewels and a sword, there was “an immense revolver thrust into his belt”. But more interesting even than the ruler’s appearance, the Frenchman recalled, was their conversation on photography—Ram Singh, he realized, was not only “an admirer of this art, but is himself a skilled photographer”. In fact, for about a decade, the maharaja had been a member of the Bengal Photographic Society, long before he acquired his first camera in 1862. And while princes across India developed a fondness for photography, few mastered it in the way he did—or created a collection that encapsulates a world in which the Victorian and the Indian met both constructively as well as to do ideological battle.

It was portraiture that caught the maharaja’s attention. In 1870, for instance, he photographed Queen Victoria’s son just as he did his palace doctor. But what are more stunning are the portraits he made of women in his harem. There were Hindus and Muslims; senior concubines (pardayats) and junior mistresses (paswans). But, as scholar Laura Weinstein notes, to photograph women in purdah was “completely without precedent”. While Ram Singh never made portraits of his senior wives, by bringing his establishment into view through the camera, he dispelled multiple stereotypes about the harem. Where the British painted the zenana as a sinister place, lacking in fresh air and guarded by scheming eunuchs, the women who appear in Ram Singh’s photographs are powerful, dignified and far from Victorian cliché. “The zenana portraits,” tells Weinstein, “reveal no sickness or dirt, depraved or deviant faces, exposed bodies or sexually suggestive poses.” What they show is a world where there is no pressing demand for Western “light”—where there is nobody crying to be “rescued” from despotic oriental hands.

It is tempting to think that Ram Singh was making a conscious statement as he Indianized the gaze of the Western camera. By turning his lens towards the harem, he struck at norms that concealed royal women; and by photographing the zenana’s inmates in confidence, he was challenging colonial tropes about Indian women and royal depravity. Indeed, for all the things he achieved in his remarkable life, this is one of the most memorable. Throughout the 1860s and 1870s, even as he carried out his programme of administrative reform in Jaipur, the maharaja honed his skill with the camera. And by the time he went to the grave in 1880, Ram Singh had journeyed through a world of experience: from the young prince of 1857, who gambled in favour of the British, to the photographer-maharaja who claimed for himself the right to depict Indianness and reject hackneyed images perpetuated by the Raj.