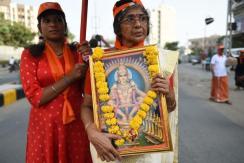 In 1934, a committee of men investigating temple entry for Dalits in Travancore summarized the religious constraints impeding this demand. Various “Mantras and Tantras”, it noted, were needed to consecrate in any image the “Divine spirit”. This being done, “care has to be taken that the power is not dissipated”, a process that required Brahminical rituals but also protection from an assortment of “adverse influences”. These influences included, besides defilement by vultures, dogs, donkeys, and other animals and reptiles, “the entry of certain classes of people into the temple premises”. In other words, “judged by the Sastras and by the usage relating to temples… (Dalits) cannot be said to have a right to be admitted” to Hindu shrines. Moreover, the committee added, citing a 1914 Madras high court judgement, courts too could not intervene in religion; the princely ruler, it emphasized, could not challenge “the principles of the Smritis and the express rules of the Agamas”; and while a “compromise” featuring partial access might be tolerable to prevent the “heavy landslide” of Dalits from Hinduism to rival faiths, no “sweeping change” was advisable.

And yet two years later, the maharaja of Travancore stunned Malayali society by going ahead with “sweeping change”. On his birthday in 1936, the ruler, alarmed by threats of a mass exodus of Dalits from Hinduism, proclaimed temple entry for all castes. While within his state sheer determination held the peace, retaliation from the orthodoxy in wider Kerala was furious. The maharaja of Cochin banned Travancore priests from serving in his lands, going “to the extent of declaring the whole people of Travancore as untouchables”. The Zamorin in British-ruled Malabar expressed his censure, refusing to yield even as late as 1942. Indeed, in Travancore itself, the maharaja’s own aunt ceased visiting their principal shrine where Dalits now had open access. But having taken his decision—albeit to consolidate the Hindu community—the ruler was immovable. When in the temple town of Suchindram, for instance, locals refused to participate in a chariot festival due to low-caste presence, his chief minister, Sir C.P. Ramaswamy Iyer, a Brahmin, lent his own hands to the chariot, making a clear statement.

Eighty-two years have passed since the events of 1936, but history repeats itself this week in Sabarimala where masses of people have gathered to “protect” its celibate deity from the calamity fertile women bring. The argument is much like the one made by the temple entry committee in the 1930s. Ayyappan of Sabarimala is consecrated a brahmachari; the advent of women will diminish His sanctity and breach age-old custom. Where before 1936 Dalits were believed to threaten the sanctity of all gods in all temples, today we have a single shrine where another group marginalized in history must work around tradition and its claims of immutability. The cry to preserve Sabarimala, as it is, is shrill, and while religion evokes emotions, the claim that custom is untouchable is, actually, unhistorical. Ayyappan atop Sabarimala hill is consecrated in a way that disallows women, they say; well, till 1936, every single god was consecrated in a way that disallowed Dalits. That custom changed—with the executive enforcing a view their own advisers abhorred—and decades later, few would argue that the arrival of Dalits in temples has demolished the integrity of the deities before whom they today worship.

In a few years from now, when women go routinely to Sabarimala and Ayyappan remains as resplendent as before, we may laugh at today’s protests. Just as Kerala shakes its head at those who objected to temple entry in the name of tradition all those years ago, we may wonder why in 2018 there was such rigid objection. But while discomfort is understandable, it may be worth remembering that history is full of evolution and change. For if it had been otherwise, Malayali society would look very different today. In the 1860s it was conceded at last that perhaps dipping one’s hand in boiling ghee was not the most foolproof method to determine guilt; but there were men who disagreed in the name of custom. In the 1920s, the maharani of Travancore flouted old traditions when she terminated animal sacrifice—no more bloodshed, she declared, providing ancient temples cucumbers in place of cocks and goats to kill. Again, many objected and highlighted custom. When a Brahmin woman wore a blouse in Kerala she was excommunicated for her innovation—custodians of tradition preferred traditional toplessness, and even men wearing shirts were seen as rebels. But (leaving the patriarchal politics of this aside) would the most orthodox Brahmin today suggest his female relations return to that ancient custom where the piety of a woman depends on the bareness of her breasts?

The temple entry committee of the early 1930s justified these specific changes by noting that the original practice was, to begin with, never sanctioned by sastras—the entry of Dalits, on the other hand, was expressly prohibited by the great books in Sanskrit. For their pains they were cordially ignored, and the ruler proceeded to introduce a new morality, in view of the politics and callings of his own time and mind. Today again we have a leap to be made, where a custom stands before the morality of our national Constitution—one will have to bow before the other, and both cannot together prevail. The past offers us a guidebook by which to reconcile to change. It may at first be upsetting, and it may look unholy. But think of 80 years from today, and perhaps then those protesting in Sabarimala might recognize which side of history they wish to serve. Ayyappan did not go away when custom was broken to bring Dalits before his gaze; it is hardly likely He will cease to be celibate because women behold him, after years of being kept away.