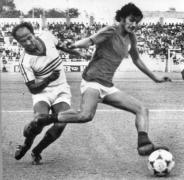 In 1314, the mayor of London issued a proclamation banning a particularly rowdy sport that had captured the imagination of large numbers of the city’s residents. There was, he announced, “great noise” in town caused by this “hustling over large balls”, and so, “on pain of imprisonment”, the game was outlawed in the name of King Edward II—and of course God. The whole business concerned what we recognize today by the more innocent name of football, but at the time it was considered a monstrous affair, as men kicked about an inflated pig’s bladder from one village to another. No rules existed, and the upper classes sneered at this disorderly pastime of their inferiors, oblivious that centuries down the line, “ffooteball” fever would infect the entire world, birthing an industry so profitable that even God might be forgiven for reconsidering his position.

As with the English language, when the British transported football to India, they didn’t quite expect the “natives” to match them at it. Records suggest that it was in 1721, in Gujarat, that western traders first began to play cricket, while the earliest extant report of football appears over a century later in an 1854 newspaper. This second sport, however, was inaugurated on India’s eastern flank, in Bengal, when the (white) “Gentlemen of Barrackpore” played against the (white) “Calcutta Club of Civilians”. Football, by now, was acquiring a distinct shape and structure, with formal rules and codes. That these rules varied from place to place did not matter—the Victorians had realized that this was a “masculine” exercise for boys as they grew into men, besides serving as an outlet for dangerous hormonal energies. Controlled aggression in an authorized environment, besides, appeared to impart lessons in discipline, obedience, honourable victories, and dignified defeats. And so, slowly, football became respectable.

It was another matter, of course, that the British were not particularly dignified in the manner in which the sport was passed on to Indians. They had their exclusive clubs in various cities, besides the teams of army regiments. But even after the 1880s, when Indians formed their own clubs in Bengal—Shobhabazar, Aryans, and so on—the establishment thought little of locals and their sporting capabilities. “By his legs you shall know a Bengali,” declared one journalist in 1899, asserting that the typical Calcutta male’s legs were either hopelessly thin, or else “very fat and globular…with round thighs like a woman’s.” “The Bengali’s leg,” simply put, was “the leg of a slave”. And this at the end of a decade when Bengali clubs had already started to win small victories against British teams, and just before Mahatma Gandhi was inspired to establish in South Africa his “Passive Resisters Soccer Club”.

What really announced India’s arrival on the football scene, however, was the contest between the Mohun Bagan Athletic Club and the East Yorkshire regiment for the legendary Indian Football Association (IFA) Shield in 1911. The team was representative of emerging middle-class Indian aspirations—one member, writer Ronojoy Sen records, was a clerk, while another was an employee of the public works department. A third was a veterinary inspector, but all of them were products of the English education system, with a growing consciousness of their identity as Indians. They played barefoot, partly because a pair of boots in the early 1900s didn’t cost less than Rs7—an average schoolteacher’s monthly salary. It was no surprise, then, that when Mohun Bagan made it to the finals, against all odds, the football maidan attracted some 100,000 visitors, including from Bihar, Odisha and Assam.

As it happened, the Indians won both the trophy and much prestige. “May God bless the Immortal Eleven of Mohan Bagan for raising their nation in the estimation of the Western people,” rhapsodized the Amrita Bazar Patrika, noting that this victory demolished the old jibe about Bengalis being “lamentably deficient” in physical prowess. Besides reasserting the Indian male’s masculinity, the victory of a barefoot team against a privileged English set also rang resoundingly of nationalism—as historian Partha Chatterjee notes, the win in 1911 came at a time when Bengal was electrified by armed resistance against the Raj, not to speak of agitation challenging the partition of the province by Lord Curzon six years earlier. If sport had helped discipline Englishmen to conquer the world in the Victorian era, now football shattered imperial arrogance as Indians reclaimed their pride at the close of the Edwardian age.

Of course, hopes of football sparking a righteous nationalist fire did not pan out quite so romantically. As with cricket in Bombay, where Parsis played against Hindus who played against Muslims, in football too, difference reared its head. In 1911, the Mohammedan Sporting Club enthusiastically celebrated the victory of their “Hindu brethren” against the British, but by the 1930s the mood had chilled. There was this leading “Muslim club” and then there were “Hindu clubs”. Among the Hindus, there emerged an additional problem of regionalism—the East Bengal Club was formed mainly on account of a grievance that west Bengalis looked down on easterners. In other words, where two decades earlier nationalism had electrified the sports arena, football was afflicted now by the poison of communalism.

It might have spelt wholescale disaster, but, luckily, a change in political winds transformed the horizon. With World War II and the advent of independence, sport for the love of sport—and not as a vehicle of nationalism or communal pride—slowly began to become possible. And in 1947, with those very legs once written off as resembling slaves’, Indians turned around and gave the British a proverbial kick off the field they had for so long tried to dominate. New problems emerged—of poor infrastructure and state indifference. But by then Indians had already embraced football, doing their bit in transforming an old game that once featured a pig’s bladder into an enduring obsession of their own.