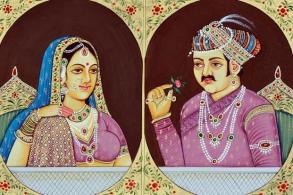 In 1575, authorities in the port of Surat prevented a woman called Gulbadan Begum from embarking on her pilgrimage to Mecca for an entire year. Negotiations dragged on, and eventually, she had to bribe with the entire city of Valsad in order to board her boat. It was no surprise that the begum paid in town, not coin—Gulbadan was, after all, the daughter of emperor Babur and aunt to mighty Akbar, then sovereign of all of upper India. It was, however, revealing that even a senior representative of the imperial harem found herself applying for leave to sail, for the truth was that the Mughal emperor’s power met its limit at the beach. It was, instead, the writ of the king of Portugal that prevailed in the Arabian Sea, and without Portuguese permission, no princess, of whatever consequence, could depart India’s shores. Even as Akbar dismissed the Portuguese as “chickens”, Mughal ships quietly paid to carry on their business—the Europeans might have been overpowered were they on land, but on international waters their mastery of naval warfare ensured that even the imperial family gnashed its teeth but, ultimately, fell in line.

In 1613, during Jahangir’s reign, however, the Portuguese, already imperilled by the arrival of the Dutch and English, went a step too far, hastening their decline in India. The emperor, to be sure, was a friendly, curious man—when the English presented him two mastiffs, he was so thrilled he had the dogs carried around in palanquins—and he might have allowed things to carry on as before. But that September, Portuguese provocation was so brazen that only firm action could restore Mughal prestige. The underlying issues were many. Politically, the ignominy of seeking licences was a demonstration of the limits of Mughal power, always somewhat embarrassing when the emperor was officially “Conqueror of the World”. Then there were religious concerns: The Portuguese were such fervent Christians that each cartaz (licence) carried images of Jesus and Mary—a troubling detail for Muslims compelled to buy these documents in order to do the haj. In 1613, a Hindu lady also got embroiled in these Mughal-Portuguese dynamics, her wrath bringing down the full force of the empire, ringing the death knell of the latter’s long-standing power at sea.

The lady in question was Mariam uz-Zamani, though she is often popularly called Jodhabai, the Rajput princess who was Akbar’s wife and Jahangir’s mother. While conventional depictions are somewhat limited—she is beautiful and regal in a tedious, overblown sense—in actual fact, the dowager was a formidable woman. Described by a contemporary as “a great adventurer”, she towered over phenomenal business enterprises even while sequestered in the Mughal harem. At court, as scholar Ellison B. Findly notes, she was one of four seniormost figures and the only woman to hold a military rank of 12,000 cavalry, entitling her to the right to issue firmans of her own. She was also the proprietor of the Rahimi, believed to be the largest Indian vessel trading in the Red Sea, displacing 1,500 tonnes, its mast some 44 yards high. In addition to goods worth millions, the dowager empress regularly conveyed Muslim pilgrims to Mecca on her ship—this, when she wasn’t actually funding the construction of mosques, even while she remained herself a practising Hindu.

In 1613, however, the Portuguese decided it was a clever idea to seize and subsequently burn the Rahimi. The action was unprecedented, and, given who the owner of the vessel was, the insult landed straight on the otherwise cheerful, opium-loving Jahangir. The whole affair was meant to gain leverage at a time when the Portuguese were threatened by competition from other European companies. But as it happened, the move backfired. As one observer noted, Jahangir immediately had Daman besieged, blocked all Portuguese trade in Surat, and “hath likewise taken order for the seizing of all Portingals (sic) and their goods within his kingdoms”. Furthermore, the emperor “sealed up their church doors and hath given order that they shall no more use the exercise of their religion in these parts”.

Rattled, the Portuguese made amends by offering Rs3 lakh as compensation, but on the condition that the Mughals expel the English from Agra. Jahangir refused to blink, however, calling the Portuguese bluff, and welcoming soon afterwards in 1615 Sir Thomas Roe, the famous English ambassador. “The Portuguese folly in the capture of the Rahimi, then,” writes Findly, “tipped the scales in favour of the English.”

But it was not as if the newcomers were granted a red-carpet reception—on the contrary, the playing field was merely levelled somewhat. Mariam uz-Zamani herself wasn’t sympathetic to the English: In 1611, after an Englishman outbid her at the indigo market in Bayana, she exerted enough pressure on her son to ensure that Roe’s unofficial predecessor, William Hawkins—the “English Khan” who till then was friendly with Jahangir—had to pack his bags and leave for good. In any case, if there was any doubt that the emperor’s mother was a force to reckon with, the affair around the Rahimi dispelled such thinking. And in 1623, when Mariam uz-Zamani died—still immensely rich and powerful—due honour was given to her by burying her in a mausoleum close to that equally redoubtable man to whom she was once married: emperor Akbar.