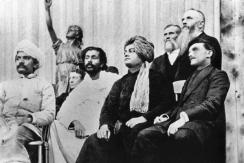 It is tempting to wonder if Swami Vivekananda might have achieved his enduring appeal had he chosen to remain a “Vividishinanda”, or even a “Sachchidananda”, at the time of his defining visit to the US. These were, after all, names he preferred at various points, before finally confirming, in 1893, the label by which the world remembers him.

“Vivekananda” certainly rolls better off the tongue than the other options, but significantly, it is also the name by which this peerless Bengali monk has been appropriated by practically every political camp in contemporary India, to deploy in support of even antithetical motives. To those whose blood is not red but saffron, he was a champion of Hindu pride. Those, on the other hand, who abhor majoritarian impulses, also point to the very same man, in whose preachings may be found endorsements of a liberal nature. Veritably, this iconic thinker-saint, whose birth anniversary it was on 12 January, has emerged as everybody’s favourite, precisely because he can be different things to different people.

Vivekananda’s story is well established: born as Narendranath into a bhadralok (genteel) family in Kolkata, a promising academic career, his encounter with the spiritual master Ramakrishna, and his transformation thereon as not only an architect of modern Hindu thought but also as a messenger for India itself. What firmly confirmed him as a force, however, was his famous address at the Parliament of Religions in Chicago. As his Irish disciple, Sister Nivedita, remarked, “it may be said that when he began to speak” at that 1893 gathering, “it was of the religious ideas of the Hindus”. By the time he had finished his monumental address, “Hinduism had been created”.

This modern rendition of ancient traditions entitled him to honour, but some offer fantastical tales that heralded much earlier the certainty of distinction. He was Shiva incarnate because, as a child, the only way to calm his mischief was to pour “cold water on his head and simultaneously (chant) the name of Shiva”. When a snake slithered into Narendranath’s room while he meditated, so admiring was the reptile that it sat still, utterly transfixed. These stories served their purpose in romanticizing Vivekananda’s work with magical, god-ordained destiny, but we can safely conclude that they are entirely apocryphal.

The philosophy he upheld was a refashioned Advaita Vedanta. But esoteric concerns aside, what electrified minds was his blending of religious reawakening with national reinvigoration. After generations of inferiority complex fed by a colonial state—that India was rotten and devoid of civilizational value—Vivekananda refused to argue on conventional terms. “Let others,” he declared, “talk of politics…of the immense wealth poured in by trade, of the power and spread of commercialism, of the glorious fountain of physical liberty.” The “Hindu mind” did not care—India’s mission was not to count coins, focused as it was on “the evolution of spiritual humanity”.

This formula emphasizing spirituality was not original, but where Vivekananda differed from previous reformers—who too sought to restore confidence but whose message circulated within the elite—was in his conviction that the masses needed awakening, and that religion was the medium for it. “Before flooding India with socialistic or political ideas,” he argued, “first deluge the land with spiritual ideas.” That he travelled the length of this vast country, and to places as distant as Nagasaki and New York, further energized his cause.

His spiritual ideas were derived from Sanskrit philosophy, even though its dissemination was not to remain in the language of philosophers. “It is an insult to a starving man to teach him metaphysics,” he observed. Things would have to be simplified, translated into vernaculars, and “fiery” missionaries enlisted to transport this message. Old movements such as the Bhakti of popular worship had to be discarded. While in Chicago he highlighted divine love, in India he saw Bhakti as making the nation “a race of women!” Odisha, for example, was “a land of cowards; and Bengal,” he admonished, “has almost lost all sense of manliness”.

While not violent, Vivekananda envisioned Hinduism as a proactive faith and not one that remained complacent in disorganized variety. Such a reinvention of Hinduism, he affirmed, was the key to “awaken the national consciousness”. Internal differences had to be weeded out, because “the whole secret lies in organization, accumulation of power, (and) coordination of wills”.

Reformers from below, for instance, were not to show aggression against orthodox Brahminism. An example Vivekananda cited was the American blacks. “Before the abolition, these poor negroes were the property of somebody, and…(were) looked after…Today they are the property of nobody. Their lives are of no value.” So, too, in India, despite injustices of caste, it was unwise to attempt to push the elite out of the way, crippling unity. Besides, “To the non-Brahmin castes I say…you are suffering from your own fault. Who told you to neglect spirituality and Sanskrit learning?…Why do you fret and fume because somebody else had more brains, more energy, more pluck..than you?” Despite problematic pronouncements as this one in 1897, to his global audience, Vivekananda’s voice was refreshingly open. “I am proud to belong to a religion which has taught the world both tolerance and universal acceptance. We believe not only in universal toleration, but we accept all religions as true”—a message highlighted by liberal Hindus to challenge the often physical violence unleashed against minorities in India today.

There were in Vivekananda’s message contradictions, and indeed he may have had more than one message. In his own time, however, these did not seem like contradictions at all. He simply spoke to different people in different ways. To Indians battling caste, speaking multiple languages, and with regional identities, his purpose was to engender national unity by reinventing Hinduism. To those abroad, his mission was to present Hinduism not as that tangled jungle of superstition the British saw, but as a mature, magnificent faith. Consistency wasn’t perhaps Vivekananda’s strong point, but, in the end, it was also precisely his inconsistency that made him such an appealing figure to such large numbers of people in India as well as abroad.