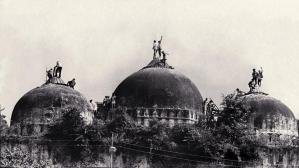 On 6 December 1992, when a mob tore down the 16th century Babri Masjid in Ayodhya, an entire nation watched in horror as governments of the day stood by, pleading helplessness. Twenty-five years have elapsed since that event, and many more may pass before anything close to a real—and sensible—resolution is reached to what is essentially a festering wound. But if in living memory Ayodhya has gone down as a symbol of the worst manifestation of communal politics in India, there is an episode in its past that could be construed as the inaugural chapter of this ugly narrative, pitting Hindu against Muslim, man against man. And unlike recent times, when a mosque became the scene of violent confrontations, many years ago it was a temple that attracted the attentions of a fanatic crowd, whose actions became linked in several ways to the larger discussion around the Ram Janmabhoomi agitation.

The story goes back to the mid-19th century. The nawabs of Awadh, who seized sovereignty in the region, never actually enjoyed absolute power in their princely domains. As was the case with Muslim rulers across the subcontinent, authority was, in fact, exercised in cooperation with Hindu elites. In pre-Mughal Deccan, for instance, its sultans utilized Brahmins and Marathas as their intermediaries with the masses, while in Awadh the nawabswere served by Kayasthas in the running of their administration, and by legions of Hindu warrior ascetics (or nagas) in waging war against their enemies. As the splendour of the nawabs grew, so too did the wealth and influence of these classes—the frenetic building of temples in Ayodhya in the 18th century, for example, had a great deal to do with the wave of prosperity enjoyed by the Hindu aristocracy under a thriving nawabi court, which also patronized pilgrim activity that, in turn, revitalized the cult of Ram.

It was the second nawab, Safdarjung, who, in return for their military services, gave the Ramanandi nagas money for the construction of a shrine to Hanuman at a spot about 700 metres from the Babri Masjid. In due course, a Hindu nobleman enabled the expansion of this structure into what is today the Hanumangarhi, described as a temple-fortress, and which in the 19th century possessed gifts from the crown that brought it Rs50,000 in revenue. Scholars like Hans Bakker and Peter van der Veer note that Babri itself is believed to stand on the site of an 11th century Hindu shrine that was demolished and converted into a mosque by a Mughal general. Van der Veer notes, furthermore, that some pillars from an old temple were said to have survived, unwittingly also becoming pillars for the cause of “restoring” the premises to its original use. In any case, the irony was that far from splitting communities into irreconcilable foes, till the mid-19th century, Hindus as well as Muslims worshipped at Babri in peace and harmony, albeit in different parts of the compound.

The first communal conflict that Ayodhya witnessed occurred in the mid-1850s. On the face of it, this was a Hindu-Muslim feud. As we learn from The Anatomy Of A Confrontation, a collection of scholarly essays edited by Sarvepalli Gopal, and other sources, Shah Ghulam Husain, a Muslim firebrand, claimed that Hanumangarhi stood, in fact, on the ashes of a mosque that dated back to emperor Aurangzeb’s reign. His call to “reclaim” the temple was answered by enough men to result in a violent clash soon afterwards. The Muslims were not just repulsed, however; we read how the Hindus took the skirmish into Babri next door, which Husain’s fighters had used as a base. In the course of events, 70 men were killed on the Muslim side. An attack on Muslim civilians, and plunder of their property, followed, with reprisals after some Hindus decided to make a grand display of slaughtering pigs on the day the 70 fallen Muslims were buried. It was, simply put, provocations galore and blood and violence everywhere.

While this was superficially a Hindu-Muslim conflict, in reality matters were somewhat complicated. Muslims in Awadh comprised 12% of the population; the vast majority was Sunni. The nawab, however, was of Shia persuasion, and the cream of courtly patronage was distilled in favour of the Shia minority. That the reigning nawab, the colourful Wajid Ali Shah, was also an admirer of Hindu traditions, in addition to the court’s general collaboration with Hindu elites, provoked Ghulam Husain, described as an “arch villain”, and his “vile”, “disreputable” followers to plot their attack on Hanumangarhi. This was, in other words, not only a move against the Hindus but also a Sunni rebellion against the unorthodox Shia nawab. In any case, while Husain’s plot was a failure, his place was soon taken by another zealot, the maulvi Amir Ali. And this man went as far as declaring a jihad to occupy Hanumangarhi and re-establish the mosque that was supposed to have existed within.

Interestingly, the claim that there was a Muslim place of worship in Hanumangarhi may not have been incorrect, even if it was inaccurate in the vocabulary of its expression. While a committee constituted by the nawabfound that there was never a mosque within the fort, it is likely that the Muslims were building on an earlier tradition when they enjoyed access to the shrine. Before the Ramanandi nagas turned it into their military seat, the deity in the temple was worshipped by Hindus as Hanuman and by Muslims as Hathile, one of the five saints (panch pir) of Sufism. It was not a full-blown masjid as such, but by closing access to the shrine to Muslims, those in charge of Hanumangarhi allowed grievances to mount. This, in turn, culminated in the imagined memory of a “mosque” that required reclaiming, even if this meant shedding blood and sacrificing lives—an example of how extreme piety can quickly transform a shadow from the past into incontrovertible “fact”.

In any case, when Amir Ali refused to accept the decision of the committee, the stage was set for battle. Armed with fatwas from Shia as well as Sunni clerics that declared Ali’s jihad illegal, the nawab’s forces under British command intercepted him on his way to Ayodhya. A few hundred rebels lost their lives, and their obstinate leader too fell on the battlefield. Hanumangarhi was retained by the Hindus, while in Babri the British erected fences to separate the mosque from the platform where Hindus offered worship. What is curious, however, as detailed in Sarvepalli Gopal’s collection, is that some date the first claim that the masjid sat on the spot of Ram’s birth to the mid-1850s—when the Muslims claimed Hanumangarhi as “originally” a mosque, the Hindus, as a counter-claim, reminded them of the temple upon which Babri was supposed to have been built.

The matter may never be satisfactorily resolved. So perhaps the best lesson we can learn from the last time a mob went to destroy a place of worship in Ayodhya, before the tragedy of 1992, is that at least on that occasion, those in power did not stand by idly; that, instead, they did their duty and protected the temple from destruction, something that cannot be said of those who watched quietly as a mosque was razed more than a hundred years later.