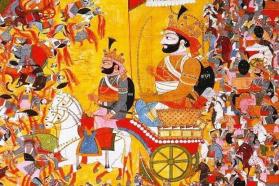 If ever there was a man who was attentive to the tribulations of kings, that man was Kautilya. While there might have been several minds invested, across spans of time, in the composition of his Arthashastra, Kautilya’s manual of statecraft was a model of exactness to guide the hands of power. Thus, for instance, for relatively more ordinary varieties of criminal offence, the punishment suggested is “tearing apart by bullocks”, but for the singular error of romancing the monarch’s wife, things could only end with the seducer “cooking in a big jar”. Torture, in general, was to be perfectly timed, with meals in between for the torturer and the subject of his attention, though exceptions of format could be made if the criminal in question were a Brahmin—so while a regular sinner might discover parts of his body set on fire, one with the sacred thread wasn’t permanently charred, keeping his life, but losing his eyes.

Kautilya’s treatise is one of the many sources from ancient times that Upinder Singh studies in her authoritative new book, Political Violence In Ancient India (Harvard University Press). It is an unembellished title and the language of the book follows this pattern, offering a 1,000-year overview of how violence and its philosophical corollary, non-violence, were treated and reconciled by thinkers many centuries ago. So while some hagiographies might show Ashoka roasting his brother and rival for the Mauryan throne and slaughtering 18,000 Ajivikas before his evolution into a crusader for peace, the fact is that we don’t really have reliable statistics for how (or how many) people died in political settings all those ages ago. The book, therefore, is necessarily “a history of ideas”, which studies intellectual responses to violence, from sources such as the Vedas to the plays of Bhasa and Kalidasa, alluding to Harappan remains as well as to the times of the Guptas.

Singh sets out, in a very balanced fashion, to challenge a basic principle many of us have, over years of schooling and nation-building, systematically absorbed: that India has been an eternal beacon of non-violence and harmony. The truth, as the author demonstrates, is as complex as the other truths of life. For what we see is the emergence of non-violence as an ideal mainly among Buddhists and Jains, subsequently adopted by Hindu sources as well, but always with a parallel understanding that in the practical universe of economics and politics, involving masses of people, non-violence is a principle that cannot always be upheld. So we find even Ashoka struggling to persuade his palace establishment to accept a fully vegetarian kitchen, as much as we encounter Eastern oligarchies, sites evidently of greater political confrontation than the monarchical West, welcoming Buddha’s doctrine of peace and offering patronage without irony.

The basic formula all sources seek to conceptualize is how much violence is justifiable and judicious for the maintenance of order. So while “the Buddha taught a doctrine of detachment, Buddhism was never detached from the political sphere”, and understood this conundrum. The Mahabharata, similarly, “is pervaded by relentless violence”, as is the Vedic world, and they are all aware that non-violence, for all its splendid dignity and significance, cannot meet eye to eye with the realities of the world. So when Yudhishthira, predictably, grapples with morality and what is correct and honourable, Bhishma tells him how “nothing great can be achieved through pure compassion” besides turning oneself into “a compassionate and righteous eunuch”. “While the Mahabharata,” Singh writes, “from time to time lauds non-violence as a didactic principle, the main story…. (leaves) no doubt that the king must not, cannot, practice non-violence.”

One of the most enjoyable sections in the book is Singh’s discussion of violence as it appears in the Panchatantra tales, which seem to contemplate the issue not from the perspective of kings but from several levels below. “In the Panchatantra,” we learn, “the denunciation of kings is much stronger than their praise…. Like that of a prostitute, his behavior takes many forms…. The bottom line is: Kings are violent and dangerous.” So too, it is shown, that violence is “central to most of the Panchatantra stories” which, more than the morals they seemingly convey, also implicitly transfer insights on pragmatism and common sense. Thus, for example, we have the tale of the ass in leopard’s skin who thinks a farmer in a grey blanket is a she-ass. The supposed she-ass runs, fearing it is a leopard, but the moment the ass reveals its true (weak) identity through an apparently seductive bray, the she-ass turns around and shoots an arrow into its heart. The lesson for ordinary souls: Always be on your guard, and don’t ever think like an ass. The most enduring human quality, after all, is our breathtaking stupidity.

At almost 600 pages, Singh’s is a work of scholarship that will take some time to fully digest. We return to Buddhist and Jain works, as much as to Hindu sources and epics with every theme under investigation, and on the whole most of the textual authorities of Indian antiquity have been covered without prejudice. What is missing, however, is a greater share of south Indian material, which is a weakness the author acknowledges. With the addition of authorities from the south, the book might perhaps have been several dozen pages longer, but it would have been richer still. That said, at the end of the day, what Singh offers is a thought-provoking intellectual history of our dealings with violence, demonstrating that 2,000 years ago, Indians were as full of questions as they are today, and that we would only be letting down our best traditions if now we were to suddenly stop asking them.