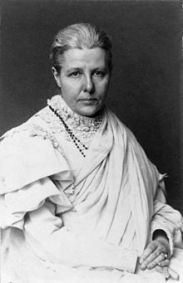 When Annie Besant arrived in India in 1893, she had already accumulated enough notoriety for a lifetime. This was a woman who had separated from her clergyman husband, losing custody of both her children. And given her “wayward” conduct, his Victorian peers justified the raising of his hand against her, including, it appears, for her reluctance to share his bed. Her son was handed over to the father during the divorce, but she lost her daughter only after the man discovered the girl had forgotten her prayers—her mother had confidently told her there was nobody listening at the other end. Distraught though she was on losing her child, Besant remained defiant. “It’s a pity there isn’t a God,” she declared as she exited the courtroom. “It would do one so much good to hate him.”

The irony was that this Irishwoman who eventually found her way to India began her life immersed in religiosity. She was born on 1 October 1847—a day and 22 years before Mahatma Gandhi, whose ascent would mark her eclipse. Her widowed mother enrolled her in an unconventional school where Besant obtained a good education, and where the boys too were made to sew. But it was a deeply Christian setting, and unquestioning service was the cornerstone of her existence. At 18, she met Frank Besant and accepted his proposal, hoping it would bring her closer to God—in reality, she found herself discussing laundry with other pious wives. Her restless mind, fear of domesticity, and a waning belief in Christ resulted in a meeting with a theologian to get closer to the “truth”. “It is not your duty to ascertain the truth,” he said sharply, nearly accusing her of blasphemy.

After her marriage collapsed in 1873, Besant joined the National Secular Society. Alongside Charles Bradlaugh, leader of the Freethought movement, she wrote on science and economics, becoming also a public advocate for women’s rights. While her ex-husband appointed a detective to see if she was sleeping with Bradlaugh, Besant embraced atheism. “Atheist is one of the grandest titles (one) can wear,” she explained in her autobiography. “It was howled over the grave of Copernicus…it was yelled…at Voltaire…(so that) where the cry of ‘Atheist’ is raised…we (may) be sure that another step is being taken towards the redemption of humanity.” And if all this were not adequately scandalous, in 1877 Besant confirmed her status as a rebel by republishing Charles Knowlton’s Fruits Of Philosophy, an innocently titled work that was actually a forbidden handbook on birth control.

Besant and her colleagues were charged with obscenity. “I risk my name, I risk my liberty; and it is not without deep and earnest thought that I have entered this struggle,” she stated, but the book was banned to protect “public morals”. For Besant, what followed was public persecution. She had certificates from London University qualifying her to teach chemistry, botany and mathematics, but when she sought access to the Botanical Gardens, her request was denied—the curator’s daughters went for their walks there, and the last thing he wanted to expose them to was this refractory divorcee. Others called her a deranged female, but Besant remained steely. “The moment a man uses a woman’s sex to discredit her arguments,” she pointed out, we know “that he is unable to answer (her) arguments”.

Bernard Shaw thought her a “born actress” who was “successively a Puseyite Evangelical, an Atheist Bible-smasher, a Darwinian secularist, a Fabian Socialist, a Strike Leader, and finally a Theosophist”. And indeed, Besant changed her political stands every decade—when she became a Theosophist after encountering the controversial Madame Blavatsky, she withdrew support for the Knowlton pamphlet she once defended with such passion. But at the end of the day, it was theosophy that brought her to India. On her very first trip, she gave 121 lectures, visited temples, began Sanskrit lessons, and understood that far from “civilizing” Indians, what the British presided over was an elaborate system of enslavement.

Besant won admiration from Indian thinkers for her appreciation of our culture. “Hindu polity is built up on its religion,” she argued somewhat romantically. “You have not only the Vedas and the Upanishads showing a mighty intellect…. You find the very foundation of modern science laid down as part of the Hindu philosophy.” More problematically, while caste had to go, she felt it had had “a glorious past”. Her strongest message, however, was that while “the jewels of Western learning” must come to India, “the diamonds of the Eastern faith” must also be given their due.

Besant was also, incidentally, one of the founders of the Banaras Hindu University—the scene of a women’s agitation today—her intention being to create an institution “not to enable a man to earn forty or sixty rupees a month, but to raise (his) intellect”. In 1914, she joined the Congress party, and exactly a century ago was elected its president. Her nationalism became a headache for the colonial authorities (who called her a “great nuisance”) and her home rule movement was deemed positively seditious. With World War I raging, and Besant ceaseless in her newspaper activism and speeches, she was arrested and parked in Ooty for some time. The Indian public, however, saw in her a hero, her eventual release received with great jubilation.

In the end, Gandhi’s rise coincided with Besant’s exit from the limelight, for suddenly politics moved from the anglicized Indian’s drawing room into the hands of the masses. Besant spoke no Indian languages, and could no longer lend initiative in the way the Mahatma could. “All these forty years my white body has been an asset,” she wrote. “It is no longer so.” Somewhat disappointed, she spent the rest of her years focused on the Theosophical Society’s future, in Madras (now Chennai). By the time she died in 1933, she was respected as a kind of grand dame but was no longer necessarily relevant to India’s political future.

For all that, however, nobody could deny, as biographer Rosemary Dinnage noted, that this was a lady with a “powerful will” whose “energy and courage were of an extraordinary order”—a woman whose life was a series of battles, and who faced them with fortitude as much as she did with unbending conviction.