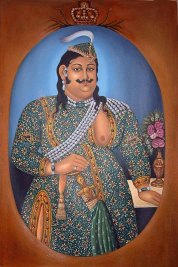 In 1874, The New York Times despatched a correspondent to India to survey the life of a fabulously wealthy man. Once he had been an even wealthier monarch, but by the time the journalist arrived, he had already spent decades in vastly reduced conditions, having lost his territories and squandered much of his money. From a kingdom the size of Scotland, Wajid Ali Shah now reigned over only an estate in Calcutta (now Kolkata). The sheer number of followers cramped into his premises, however, gave some impression of pomp—the grounds hosted over 7,000 people, including prostitutes, household guards, and dozens of disgruntled begums, not to speak of a menagerie of monkeys, bears, and 18,000 pigeons. “The Ex-King of Oude’s mimic kingdom,” the NYT called the establishment, and that is precisely what it was: a pale imitation of faded glories.

Wajid Ali Shah was a creative, difficult and interesting man. Born in 1822, he wore his hair in ringlets and dressed in robes that coyly exposed his left nipple. His early years were unremarkable but for his interest in music, dance and poetry—and for the ample proportions of his royal person. By the time he succeeded to the throne of Awadh in 1847, a state carved out of the crumbling Mughal empire, he had already produced works such as the Darya-yi-Ta’ashshuq (The River Of Love) and the Bahr-e ‘Ishq (The Ocean Of Affection). His plays were sensational productions that took months to put together, and every now and then the Shah threw grand parties—the Yogi Mela of 1853 saw his gardens opened to the masses, with everyone instructed to dress in saffron. In 1843, he directed a play on the deity Krishna, with four of his wives playing milkmaids and prancing around the stage.

Predictably, the heavily starched, completely avaricious British were displeased. “The Heir Apparent’s character holds no promise of good,” it was noted. His “temper is capricious and fickle, his days and nights are passed in the female apartments and he appears to have resigned himself to debauchery, dissipation and low pursuits”. This, of course, made for a wonderful excuse for annexation, so that even when the Shah made efforts to govern his kingdom well, producing an administrative manual called the Dastur-i-Wajidi, the British preferred to dismiss him as an imbecile. Less than a decade after his succession, when he was told in 1856 that his kingdom would be absorbed into British territory, the Shah cried, “Why have I deserved this? What (crime) have I committed?” There was no clear answer, but one hint lies in the fact that the East India Company owed him large amounts in debt. Why bother repaying a loan when liquidating your moneylender was a more comfortable option?

Some of the blame did lie with the Shah. He loved gun salutes from the British, but when it came to actually protecting his honour by fighting the annexation of his kingdom, it was his elderly mother who made more of a real (if abortive) effort by travelling to London. While the old lady died in an alien country, her son agreed to become a pensioner of the East India Company. Once Wajid Ali Shah commanded 60,000 men, but now he was reduced to a life of domestic frustration and chauvinistic rage. There was a time when he saw himself as a modern-day Krishna, a hero whose brilliance attracted women by the hundreds. But as his biographer Rosie Llewellyn-Jones notes, “For all his passionate love poetry, Wajid Ali Shah may have been one of those men who enjoy the pursuit and capture, but do not actually like women very much.”

Perhaps this stemmed from when he was sexually abused by a nanny at the age of 8, or perhaps there were other reasons. About one wife he wrote: “Day and night I would loiter around her like one possessed.” But in 1849 he was dismayed to learn that what he got in return from her was gonorrhoea. He liked dark women, and an African wife was cheerfully named Ajaib Khanum (Strange Lady). Another consort, a descendant of a Mughal prince from his Anglo Indian wife, Sally Begum, was five years his senior, while of the eight women he divorced at his mother’s insistence, one, the redoubtable Begum Hazrat Mahal stayed on in Lucknow and waged war against the British in 1857; this lady too had more spirit than her ex-husband.

Having settled in Calcutta, Wajid Ali Shah got down to practical matters. In the next two decades, he divorced 50 of his remaining wives, but in 1878 when he tried to get rid of 27 more in one shot, the British were embarrassed—he could not simply shed begums, he was informed. The man responded with exasperation: “But the women are old and ugly!” When asked who should care for them, quick came his reply: “The Government.” By 1880, the principal queen was “living in adultery” with someone else, possibly due to sheer desperation—the king was a miser and saw a monthly allowance of Rs90 to his oldest son as perfectly generous when his own income was Rs12 lakh every year. The British, in turn, hadn’t quite counted on the man living so long and costing them grand amounts in pension.

When in September 1887, the Shah finally died, there was general relief not only among the authorities but also in his camp. “His ladies were nearly as numerous as his animals,” the governor-general’s wife recorded. “They (depart) at the rate of seven or eight a day…the slaves of an hard-hearted old man who cared more for his cobras and his wild beasts than he did for them.”

The Shah had once been heir to a kingdom and to a large fortune—a decade after Awadh’s annexation it was found that the British still owed the ex-king £2 million. He had reigned in style and patronized the arts. He was an inheritor who, were he not entrapped by prejudice and by colonial machinations, would have gone down as the creator of an even greater legacy. His downfall, however, turned him into an unhappy tyrant bent on preserving a miniature copy of his past—a past that came at the cost of depressing those who stood by him when calamity struck, and who only too late learnt that Wajid Ali, the Shah, had long predeceased Wajid Ali the embittered pensioner.