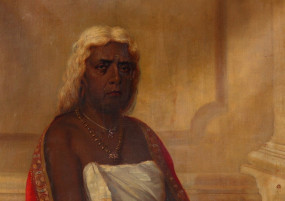 By the time of his demise in 1906, critics were convinced that Ravi Varma would feature right on top of the “rubbish heap” of Indian art. To Aurobindo, he was “the grand debaser of Indian taste and artistic culture”, a “superstition” that “received its quietus” at last in death. To Ananda Coomaraswamy, who allegedly based his denunciations on Varma’s prints rather than actual oils, his “fatal flaws” were “theatrical conceptions, want of imagination, and lack of Indian feeling”. The gods Varma painted were “in a very common mould”, aggravated by the “unsavoury” singers and prostitutes on whom they were modelled. Sister Nivedita found Shakuntala profoundly “ill-bred”, fuming that thanks to Varma, “every home contains a picture of a fat young woman lying full length on the floor writing a letter on a lotus leaf”. His paintings were indecorous, imitative, and simply not real art—they belonged on the cheap calendars where Varma himself apparently doomed them forever.

While price tags aren’t a dignified vindication of the value of any creative work, the auction of Varma’s Damayanti in New York recently for $1.6 million (around Rs11 crore) is a plausible indicator that a century after diabetes rested his brush, the artist retains appeal among more than just connoisseurs of calendars. His romantic Indian themes, immersed in mythology, were one reason for his immense popularity but “the appeal of his heroines”, Partha Mitter wrote, “lay in the fact that they were not iconographic types, but palpable, desirable human beings”. Then there was the historical period during which he crafted his reputation—nascent nationalism made his oleographs of Shivaji a rage in Maharashtra. Brahmins visited his studio to “gaze in wonder” at his splendid canvases, and poorer homes acquired prints of gods they worshipped but could never visualize—not at affordable prices anyway.

Interestingly, as Vidya Dehejia noted, Varma was “the progenitor of fair skin as an ideal of feminine beauty in Indian popular visual art”, an innovation favourably received in colonial times, penetrating masses of minds through Varma’s lithographs. He was, in this respect, influenced by un-ancient yardsticks. On the one hand, it was his aristocratic roots that steeped him in Sanskrit tales of Draupadi and Radha. But, on the other, when he portrayed these protagonists on canvas, attributes were altered to fit conventions of the day. Unlike old sculptures, they could no longer be scantily clad, and so appeared exquisite drapery. And unlike ancient poetry—from Kalidasa to the Kamasutra—they could no longer be dark-skinned, since that ideal had made way for the model of fairness. So it was that his Damayanti and Shakuntala were paler than their literary ancestors—dark strokes were reserved for lower-class women.

My own favourite Ravi Varma, however, is an obscure canvas that features a decidedly upper-caste woman of redoubtable bearing, confident in her darkness and the authority with which she occupies the frame. Glaring at the viewer (or perhaps the painter who presumed to deem fairness a requisite for beauty), this is a formidable woman who towers over the pale faces populating Varma’s better-known paintings. The difference is that this is a portrait, but while Varma ordinarily flattered his patrons by enhancing their attractive features, this one is marked by originality—he daren’t take liberties with a single characteristic of his uncompromising subject.

Her name was Mahaprabha, daughter of Chamunda. Married to an uncle of Varma’s, she was a descendant of kings, and mother of queens. But for our purposes Mahaprabha can be identified primarily as Varma’s mother-in-law—the woman with whose daughter he had a troubled marriage (which forms a significant narrative component in an awful biographical film that countered Varma’s heights of feminine beauty by depicting him as a muscular flirt with a shaved chest). Mahaprabha was, in family circles, believed to be precisely the kind of woman her painting shows her to be. “All were in awe of her and she was feared and respected,” remarked a descendant to me, and “her opinions were never refuted as none dared contradict her views”. Varma painted her as she was, without softening her piercing gaze and pronounced features.

Lambasted by J. Swaminathan for his “vulgar naturalism”, Varma was actually not from a world of fair women in silk saris writing letters and awaiting lovers—his mother was dark, regal, and an accomplished poet. His wife and her royal sisters were not fair, but were attractive women of personality (with the capacity to flout rules—Varma’s wife acquired an “addiction to drink” despite orthodox settings). Yet the growing preference for fairness took root among them too, hastened by his brush. His older daughter modelled for him thanks to her fine features and complexion (though he toned down the authority writ across her face to produce a delicate air), while a dark-skinned second daughter was destined to live in her sibling’s shadow, considered less beautiful, though not less headstrong and powerful.

There is splendour and beauty in Varma’s mythological creations like Damayanti, and these played a role in the modern re-conception of our pre-modern past, shaping nationalism and cultural confidence in a colonial age. But the portrait of Mahaprabha represents the reality of the world that created the painter—a world with a different aesthetic, not suited for pan-Indian appeal, but singularly striking. While Varma’s work is dismissed as kitsch, this is a painting that stands against his own idealizations—the woman here is not coy; she is firm in her gaze. She is not dainty, but full of force. She is real and not amenable to artistic manipulations of form and colour—it is the background he made pale, not the woman’s skin. And this very manifestation of her reality makes her, to me, more magnificent than Varma’s breathtaking mythological canvases.

If one day Mahaprabha appears at auction, I wonder what value they would assign her. For she goes back to the time before Varma gave us the cultural imagery for which he is celebrated, to a time when he had no freedom to represent truth with romance, and had to paint in oil reality as reality was, big nose, dark skin and more.