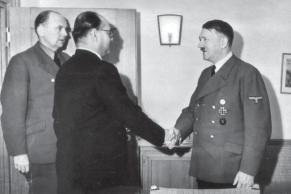 In 1973, when the first International Netaji Seminar was convened in Kolkata to celebrate the life and work of Subhas Chandra Bose, one of its distinguished participants was an intriguing character going by the name Bhagat Ram Talwar. Small, grey and physically unprepossessing, he spoke in broken English but wielded an appealingly titled paper called My Fifty-Five Days With Netaji. His appearance at the conference was, historically speaking, a sensational moment and, in keeping with the mood of the gathering, he too expressed loyalty and admiration for the tragic leader of the Azad Hind movement. Barely anyone in the audience, however, would have guessed that Talwar was, in actuality, a little more slippery than his elderly frame suggested and that while he did deliver valuable services to Bose, more than a fair deal of disservice too was part of Talwar’s contributions to the making of history.

This is the principal focus of Mihir Bose’s recently-released The Indian Spy, which weaves Talwar’s tale through a fascinating, mountainous battlefield featuring the great powers of World War II and their gripping underground contests. It was, in fact, on the edge of this landscape, near Peshawar, that our morally agnostic protagonist was born in 1908, into a family of Punjabi descent. His father was a one-time friend of the local British authorities, but after the Jallianwala Bagh massacre in 1919, turned against the colonial state—Talwar’s brother was hanged a little over a decade later for attempting to assassinate the governor of Punjab. The idea of killing British grandees also attracted Talwar, who, influenced by Bhagat Singh, set out with a dagger to murder a deputy commissioner. Unfortunately, to their “great disappointment”, his comrades and he found the man’s bed empty—their target had cheerfully gone “out of station”.

A clever, resourceful man, Talwar made no more attempts to stab representatives of the Raj but after flirtations with the Congress, pledged allegiance to a faction of the Communist movement called the Kirti Kisan Party. In 1941, he was tasked with aiding the escape of a certain individual from India to Moscow. And so it was, while smuggling his charge out of British territory, that Talwar first set eyes on Subhas Chandra Bose, pretending that Bose was a deaf and dumb pilgrim travelling through tribal lands. Bose grew a beard and moved on foot and sometimes, when his legs cramped, by mule. When informed that they had crossed the frontier, the Bengali fugitive, otherwise very becoming in his conduct, conjured up a sufficient quantity of saliva and having splattered the ground, declared, “Here I spit on the face of the viceroy!” He was actually spitting on a snowy hillside, but it was, of course, the sentiment that counted.

A series of adventures followed—including interrupting a newly-wed Afghan’s first night with his bride (who found herself unexpectedly cooking for visitors) and encountering an intimidating man who recommended hot water and alum to “treat” Bose’s ostensibly benumbed tongue. An attempt to contact the Russian ambassador was rebuffed, unsurprisingly, when they knocked on his windscreen at a traffic junction in Kabul. But the Italians opened their doors to Talwar, now masquerading as Bose’s “secretary” Rahmat Khan, even as Bose himself dealt with an attack of dysentery. In the end, since Moscow wouldn’t embrace Bose, he proceeded to Berlin and into the arms of Hitler (The Indian Spy has some very interesting photographs of Bose in Germany). Meanwhile, Talwar had a moment of self-realization when he discovered his own fairly ravenous appetite for sinister games and secret service.

Mihir Bose’s research shows that to a great extent this appetite was satisfied during World War II. He calls Talwar the only “quintuple” spy of the wartime era: he first established links with the Italians, and then collaborated with the Nazis, who had grand schemes to provoke revolt in India’s North-West Frontier Province with the assistance of a charismatic (and demanding) Pashtun called the Faqir of Ipi. Talwar, who could “invent almost any lie with impunity”, managed to get away with a fair deal (even if he was endearingly embarrassed about small things such as wanting to go to the toilet). The Germans, for instance, taught him sabotage methods and ways to make explosives. He repaid them with elaborate falsehoods, and conveyed their designs and codes to the Russians. When the Russians eventually decided to “share” Talwar with the British, the spy found himself not only under the direction of Peter Fleming (whose brother Ian created James Bond) but also with a new code name: Silver.

Over the next few years, Talwar fed large portions of British-manufactured balderdash to the Germans in Kabul, in the process betraying Bose and his plans for wresting independence for India. He would later present this betrayal as a necessary sacrifice to be made to win the greater battle against the Nazis and their Fascist allies, but how sincere this was—or, for that matter, much of what Talwar did—is open to question. Even at the 1973 conference, where he emerged unexpectedly after several decades, there was at least one figure who hinted that Talwar’s love for Bose was not all he made it out to be. Either way, in his various incarnations and in selling his loyalties to different flags (for amounts that would run into millions by today’s value), Talwar emerges as a singularly shadowy figure, whose deliciously engaging story has at last been told in equally delicious style in The Indian Spy.