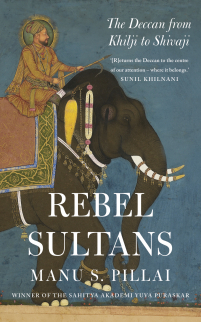 Manu S. Pillai’s Rebel Sultans: The Deccan From Khilji to Shivajitraces the history of Deccan India from 13th to 18th century.

Krishnadeva, the Raya of Vijayanagar, was a man who breathed magnificence. Poets heaped praise on him by the dozen, but the kingdom’s Diamond Throne was never meant to be his. To begin with, he was born to his father from an inferior wife, whereas his predecessor and half-brother emerged from a purer vessel. When that brother was on his deathbed, the story goes, he made his minister promise to blind the ambitious Krishnadeva so that any threat to the royal prospects of his own children might be thwarted.

The minister nodded at the disabled king, produced, it is said, goat’s eyes as evidence of the deed being done and then proceeded to merrily install Krishnadeva on the throne anyway. All rivals who lived were parcelled into a prison fortress far away, and soon Krishnadeva commenced his conquests (also finding time to compose half a dozen literary works on the side). Perhaps having observed his own mother’s plight, he elevated his beloved concubine, a dancer, to queenly status, married another princess and, after defeating the suzerain of Orissa, added his daughter also to the harem. This latest wife, however, wasn’t particularly pleased with being treated as a political compromise – the marriage was a failure both in terms of producing heirs as well as in her preference to keep as much distance from her royal husband as was possible.

But domestic squabbles aside, Krishnadeva was a man destined for greatness, one subsequent text even painting him as an incarnation of Vishnu. His flag flaunting the chakra and conch fluttered across campaigns in South India; as the Portuguese chronicler Fariay Sousa raved, when ‘Crisnao Rao of Bisnaga’ entered the field, his armies ‘covered the plains and hills and stopped the flow of rivers’. Up to 700,000 men followed him, added to which was ‘baggage in such quantities that courtesans alone numbered more than twenty thousand’.

Sanskrit inscriptions were more flamboyant. So overcome was the sun, we are told, by Krishnadeva’s shining glory, that it sank ‘into the western ocean as if quite unable to endure the distress of mind’. The imperial vaults, meanwhile, were believed to shelter treasure worth more than a hundred crores, six crores of it in precious stones; their value a thousand times more in today’s money. Though his ancestral origins lay along the coast of Karnataka, the king donated more generously to temples in the Andhra and Tamil regions of his empire – starting in 1513 he visited Tirupati six times, showering the deity with riches, presenting also an arresting bronze image of himself with his two favourite queens.

For all this, however, he was tormented by matters of succession. He had daughters (one of whom was a poet), and three sons. The first two died untimely deaths well before their illustrious father and the third was too young. So, in the end, Krishnadeva’s heir would come from that very fortress where he had locked up those blue-blooded rivals he feared could challenge his power and state.

His dynastic travails notwithstanding, Krishnadeva remained the picture of gallantry. ‘The king,’ wrote traveller Domingos Paes, ‘is of medium height and of fair complexion and good figure, rather fat than thin; he has on his face signs of smallpox . . . He is a great ruler and a man of much justice, but subject to sudden fits of rage’. Every morning, reportedly, he drank a three-quarter pint of sesame oil, after which he ‘anoints himself all over with the same oil; he covers his loins with a small cloth, and takes in his arms great weights made of earthenware, and then, taking a sword, he exercises himself with it till he has sweated out all the oil, and then he wrestles with one of his wrestlers’. After gymming so (and making a right royal display of it), ‘he mounts a horse and gallops about the plain in one direction and another till dawn, for he does all this before daybreak’. When it was time to appear in court, he would throw on a tunic embroidered with ‘many roses in gold’, a brocade cap crowning his head ‘like a Galician helmet’.

The only anomaly, as far as Paes could discern, was that the king was permanently barefoot. But seated on the Diamond Throne, surrounded by his ministers, Brahmins and robed eunuchs, Krishnadeva was without doubt an impressive figure, one who certainly appeared capable of accomplishing any challenge he set himself, no matter how daunting.