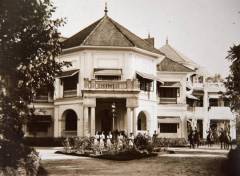 In the closing years of the reign of the Maharajahs of Travancore, there was in Thiruvananthapuram a legendary cook called Kerala Varma Pandarathil. Addressed ordinarily by his official title of bharippukkaran, this ‘unsung hero’ was chef de cuisine to the then Senior Maharani Sethu Lakshmi Bayi, presiding over the royal kitchens at Satelmond Palace in Poojappura.

Life even on an unexciting day could be exacting for the man, what with a hundred-household staff to cater to, not to speak of the Maharani herself and her exalted immediate family. But Pandarathil was undaunted, directing the madapally like a well-oiled machine, even as he innovated and experimented, manifesting sheer culinary magic. He was a wise man too, aware that the secret to the fickle hearts of princes lay in their palates. Confident in his powers, he reigned supreme till his dying day, aided by 24 juniors in a kitchen that prided itself on producing some of the finest vegetarian fare in all Kerala.

Onam, however, could throw even Pandarathil into a little sweat. There were, for instance, three types of pappadams alone to be fried and four kinds of payasams to make, not to speak of dozens of highborn guests with discerning tastes to appease. Normally, the Maharani dined privately, but such were the delicious aromas that wafted out of the madapally during the 10 days of Onam, that she too would join the festivities. “All the furniture was moved out of the main hall,” recalls Rukmini Varma, the Maharani’s granddaughter, “and Brahmin servers would stream out in a great procession from the kitchens, with enormous copper vessels on their turbaned heads.” Like a general surveying his troops, Pandarathil towered at the forefront, issuing orders and supervising the proceedings to perfection.

Distant relations of the royal family ate elsewhere, while the Maharani’s daughters and granddaughters sat in a green marble hall, helping themselves out of plantain leaves like millions of Malayalis celebrating along the coast. For the Maharani herself, silver bowls and plates were placed on the leaf, for Pandarathil considered her the embodiment of a sacred institution, not just another diner.

Onam began at Satelmond with the decoration of the Atthappan – a large, raised clay disk with a diameter of 12 feet atop which stood a massive, tall pyramid-like structure, “almost resembling a Siva Linga”. The base was covered in flowers, and around it in the evenings sang and danced the maids while the Maharani watched from the verandah, enthroned in an armchair. When the dancing moved to the inner courtyard, where her own daughters would join, the Maharani would go round a couple of times, before retiring. “The men had little to do,” laughs Rukmini, “but they would all gather around. It was a show by women and of women!”

The men did, however, have games – the Tampurans played with extended family and intimate attendants, with the talapanthukali (a ball game) breaking down social barriers and the elaborate protocol that otherwise governed palace life, uniting everybody in the true spirit of Onam. In the afternoons, the Maharani also dispensed presents, and everyone from the Dewan downwards called on her, their limousines entering and withdrawing from the gates seamlessly. Many were the grand dames too who sought an audience with the Maharani – to them, greeting her on an auspicious day could shower good luck. She in turn rewarded each visitor with a gold sovereign, while dearer relations received more special marks of affection. An onakodi was always sent to her nephew, Maharajah Chithira Tirunal, in Kowdiar Palace.

On all 10 days of the festival, the palace household would rise early in the morning to participate in religious ceremonies. State cars with liveried guards on its footboards, flanked by outriders on horses, would escort the Maharani and her family to the Fort where they attended poojas. But before this came a highly ritualised bath. The women would stream into the neerazhi (pond) where for over an hour an elaborate bath, involving several kinds of oils for the hair, the face, the body, and so on would engage them. “ Nalpamaravellam water was carried in large vessels separately,” recalls Rukmini, “very red in colour, because barks of numerous medicinal trees were boiled in it to bring out all the herbal essence.”

The maids then dressed the little princesses in kasavu mundus, with the upstairs staff handing them over to the downstairs staff thereafter so that they could be presented to the elders and run about collecting Onam presents from assorted uncles and aunts, and dispense their own to favourite servitors.

But these days of feasting and celebrations could not last forever. Starting in 1947, the Maharani’s daughter, Uthram Tirunal Lalitamba Bayi, decided to enrol her children in school, moving from Kotagiri to Coonoor to Kodaikanal, before settling in Bengaluru. In 1952 the Maharani’s younger daughter, Karthika Tirunal Indira Bayi, moved to Chennai where her children were raised. Sethu Lakshmi Bayi’s nephews and nieces left to study in England and the United States, and soon Onam in the palace became a wholly subdued affair. Independence meant that the royal family had to economise, so the number of staff declined.

But the family adapted. “We used to have an Atthappan in the porch of our new house in Bengaluru every Onam for years,” Rukmini remembers, “and grandmother’s retainers who came with her preserved those palace traditions, recreating them on a smaller but charming scale in her new home.”

After the Maharani passed away in 1985, the grand Onam celebrations of Satelmond were reduced to fond memories, with fewer and fewer members of the family able to remember the way things were. Today the Maharani’s family are spread around the world, from Australia to South Africa to the United States. And when Onam appears around the corner, they recall fondly those tales they have heard of a queen in a palace far away, celebrating a great festival in quite a different style in another time and another age.