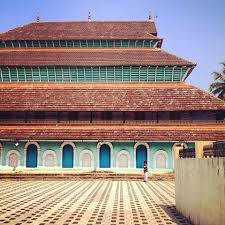 There is, in Kerala, a fascinating legend featuring the Hindu sage Vararuchi and a Pariah girl who bore him twelve children. The story is rich in metaphor, and to this day there are families along the coast that claim descent from one or another of their fabled offspring. The eldest, for instance, was raised a Brahmin, while the youngest, who had no mouth, is venerated as a temple deity. One son was a celebrated carpenter, tales connecting him to shrines across Kerala, while another was a madman whose chief delight lay in rolling a boulder uphill, only to watch it tumble down, over and over. Yet another brought to his esteemed Brahmin brother’s feast beef to eat, while one more of Vararuchi’s tribe settled as a trader. And in a tale that weaves together Brahmins and Nairs, a deity as well as a Dalit, it is this sibling, Uppukoottan, who introduces a final interesting identity; for Uppukoottan, son of Vararuchi, is believed to have been raised a Mappila, adhering not so much to his father’s Hindu traditions but to the word of the Prophet Muhammad.

While to some, the presence of a Muslim in a popular Hindu legend might seem outlandish, to Malayalis – currently bewildered by those taking offence at a years-old Mappila folk song gone “viral” – the story is by no means unusual. After all, across the length and breadth of Kerala, history and legend are united in featuring Muslims (and Christians) prominently in a shared, syncretic cultural universe. Arabs had mastered the seas even before the Prophet was born, and soon after its dawn, Islam was delivered to Kerala through longstanding channels of commerce. The oldest mosque in the region, for instance, is said to have been established in the lifetime of the Prophet himself, in 629 CE, though archaeologists quibble about the exact age of the structure. By 849 CE, at any rate, Muslim traders were consequential enough to witness a royal grant (made, incidentally, to Christians), their signatures inscribed in archaic Arabic. When the Moroccan Ibn Battuta came here in the course of his travels, he saw men from Persia too in settlements along the coast, and one of the most beautiful mosques in Calicut (now Kozhikode), the turquoise blue Mishkal Palli, was founded soon afterwards by a particularly prolific merchant who began his life and career in faraway Yemen.

The influence of the Mappilas, born from the union of Arabs with local women as well as from subsequent conversions, quickly found reflection in Kerala’s already diverse culture. Some of the principal officials of the Zamorin of Calicut were Muslims, and in the great Mamankam festival at Tirunavaya – the most important religious gathering in Kerala till the 18th century – Muslims participated in the colourful revelries as much as they did in formal royal ceremonies. At Sabarimala, where hundreds of thousands converge to worship the Hindu god Ayyappa, homage is also paid to Vavar, the deity’s Muslim friend whose name sounds (painfully to some) like Babur. The language of the Mappilas, meanwhile, developed into a unique blend of Malayalam sound and Arabic script, influenced over time by Persian as well as by Tamil and Kannada. Their architecture too absorbed Kerala’s indigenous style – the oldest mosques feature no domes or minarets, bearing instead the gables and tiled roof that crown temples and even Christian churches from this era. The nerchchas of the Mappila community, celebrating saints and divines, resemble Hindu festivals – the tall brass lamp, the elephants, bright parasols, and fireworks, all integral to the temple pooram as much as to these Muslim commemorations. There is even, in fact, a Mappila Ramayana, featuring Ravana as a Sultan and where Surpanakha’s proposition to Rama seeks sanction in the Sharia.

Indeed, even prominent Hindu lineages embraced Islam – legend has a king actually going to Mecca himself, while a Nair nobleman founded the Muslim dynasty of Arakkal. His line would come to rule over the Lakshadweep Islands, forging links with Tipu as well as the Ottomon Sultan, but retaining through the centuries, the matrilineal system of succession that allowed women to rule, unencumbered by purdah or seclusion. Such, in fact, was the mass of sea-faring Muslims in the coastal towns and ports of Kerala that Ma Huan, the Chinese traveller, was convinced in the 15th century that most of the region’s dwellers must be adherents of the Quran. One of the Hindu princes of Calicut certainly commanded every fisherman in his realm to bring up one son for Islam – this would enable them to sail the seas, man the royal navy, and contribute to the prosperity of a land where commerce was everything. And, as it happened, it was when the terms of that trade began to suddenly change that the story of the Mappila community itself encountered its first chapter of decline.

The Portuguese who arrived in 1498 quickly took control of the seas, marrying commercial rivalry with religious bigotry, expelling Arabs who had reigned supreme for a thousand years. As one authority recorded, the Europeans, with their guns and prejudice, “forbade the Muslims to trade in pepper and ginger, and then later cinnamon, cloves and other commodities…They prevented Muslims from making commercial voyages to Arabia, Malacca, Achin and Damao.” Mappila ships were burned, pilgrimages obstructed, and mosques were destroyed by white men who brought unfair dynamics into the game. At first the Zamorins, in whose dominions resided the vast majority of Mappilas, fought back – after the Mishkal mosque was destroyed, the Zamorin demolished a Portuguese fort decades later, reconstructing the mosque with the material he so obtained. But in due course the cold logic of economics prevailed – the sea of foreign Muslims coming to Kerala was reduced to a trickle, and Hindu rulers came to terms with the Europeans. A few Mappila heroes emerged such as the Kunjali Marakkars, naval guerillas who gave the Portuguese a fight. But in the end they too were destroyed, and Muslim influence, it was patent to all, was on a cascading low.

The songs of the Mappilas bear witness to this. The Mappilla-pattus fall into three broad streams. There are festive songs, sung at weddings and ceremonies, and Manikya Malaraya Poovi (the song at the heart of the current “religious offence” controversy) falls into this category with its focus on the Prophet’s love for Khadija. Then there are mala or “garland” songs, some praising great saints, and others celebrating warriors and heroes, including those who fell as recently as in the Mappila Rebellion of 1921. Among the oldest, however, is the Kotturpalli Mala, and in this the Europeans are the villains. A brave Muslim youth, we hear, is informed of a girl having been forced aboard a Portuguese ship. The courageous Mappila abandons his wedding ceremony to rescue the abducted girl, but is himself killed. His body, cut into pieces, washes up on different parts of the coast, where great miracles follow, in what perhaps bears unspoken links to the Hindu story of Sati whose scattered limbs are worshipped through shrines across India. Either way, though the Portuguese prevailed, it was the Mappilla who was honourable, his adversaries merely agents of greed and disgrace.

The emphasis on honour, however, barely conceals the existential crisis of the Mappilas in the colonial age. By the middle of the 18th century, with few exceptions, the community was poor, many Mappilas tenants of Hindu lords. When Hyder Ali and Tipu of Mysore conquered Malabar, these Hindus fled while the Mappilas collaborated with the invaders. But when defeat came to Tipu, the tables were turned: the old guard returned, and with them arrived British rule. Through the 19th century instances of violence were many, driven to a degree by economics – a fifth of the land revenue in northern Kerala came from 86 landlords, only two of whom were not Hindus. Mappila tenants could be evicted at will, and as one rebel declared in 1843, “it is impossible for people to live quietly while the…[landlords] treat us in this way.” But to this was also added extremism born from a group of fanatics – between 1836 and 1919, of the 350 Mappilas who took up arms against landlords and committed acts of murder, only 28 were captured alive. The rest, some as young as fifteen, were on a determined path to death, seeking to become shahid, following the strange passion that is today called jihadism. As one man taken alive declared: “No tongue can tell what the good things are which we shall enjoy in heaven…all sorts of delicious things.”

In 1921-22, during a massive rebellion against the British as well as the feudal class, as many as 2,400 Mappilas were killed and nearly 40,000 surrendered when the revolt folded in disaster. That, then, was the last major communal episode in Kerala. In the decades that followed, lessons were learnt, and religious extremism was shunned. When in 1969 a Muslim-majority district was created in Malappuram, there were temporary fears that this would be a “Moplastan” within India, a local manifestation of the two-nation theory. But that was not to be, and instead the Mappilas returned to a previous history from a more confident age, where a mosque could donate land for a temple, and a temple could host an iftar for local Muslims. There are today fears of radicalism imported from abroad, but then there is also the force of heritage and the wisdom of the past. Challenges might emerge, but, after all, there remain in Kerala those wonderful old songs, where a Mappila could join hands with a Hindu, and even Vararuchi could have a Muslim son.