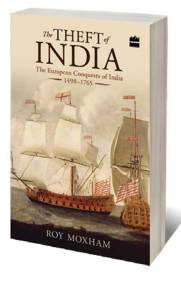 IN 1575, a lady by the name of Gulbadan Begum set out on pilgrimage to Mecca, only to find herself delayed for an entire year in Surat. The authorities wouldn’t grant her permission to sail, and in the end she had to arrange for the town of Bulsar to be given to them before she could board her vessel. It didn’t surprise anyone that she was able to bribe with an entire city—after all, Gulbadan was the daughter of Emperor Babur, sister of Humayun, and aunt to the mighty Akbar, then in the prime of his power. But it was telling that even a senior grandee of the imperial harem had to apply for leave to sail, for the Mughal Emperor’s authority ended at the beach. It was, instead, the king of faraway Portugal whose writ prevailed on the waters beyond, and without his consent, no princess, however influential, could leave Indian shores. It is to this age that Roy Moxham takes us with The Theft of India.

The appearance in recent times of a series of books on India and colonialism suggests that the history of empire is once again in demand. There is John Wilson’s masterful India Conquered that investigates the construction of British power in India, and Ferdinand Mount’s The Tears of the Rajas that describes its consequences. Shashi Tharoor delivers a withering review of colonial rule in An Era of Darkness, while Walter Reid in Keeping the Jewel in the Crown exposes British duplicity in the final decades of the Raj. What Moxham intends, however, and in which he succeeds, is to transport us to the beginnings of the colonial enterprise—to the time when the foundations of what would become the Raj were laid, not on the land it would come to dominate, but at sea where even Gulbadan’s exalted house could be challenged by the pale men of Europe. And colonialism, one realises, was developed out of an almost scrambled sequence of circumstances between 1498 and 1765, with conscious policy, if its oppressions can be called that, following only afterwards.

Moxham’s is a slender volume with an intriguing name and a dull cover that does it no justice. Its horizon is not the interior as much as coastal settlements and trading towns that hosted some Europeans uneasily and some others more happily. He begins with the story of the Portuguese, who due to a series of incidents and because of the consistently obnoxious temper of their leaders, got off on the wrong foot in India. They opened a 150-year reign of terror and violence in the Indian Ocean, till the Dutch succeeded in supplanting them with comparable propensities for irritating everybody else. Such was the disruption the arrival of Europeans caused to old networks and so disproportionate was their capacity to keep disturbing commerce that at first Indian rulers made every effort to destroy them—a siege by the Adil Shah in 1510 reduced the Portuguese to eating rats, while the Zamorins of Calicut sustained active resistance for generations. The Mughals were too grand to care about traders and their petty quarrels—till it was too late.

However, as Moxham writes in his succinct and perhaps too unembellished fashion, ‘Sometimes the Indians were victorious in battle, sometimes the Portuguese.’ After eating the rats, for instance, the Portuguese proceeded to murder 6,000 Muslim subjects of the Adil Shah. But while this drama unfolded, the pragmatic trading world adjusted to terms set by the Europeans—merchants in Gujarat, for instance, who had too much at stake in the stability of the seas, were happy to pay the Portuguese the fees they demanded to carry on unviolated. What made the Portuguese, who were always cornered on land by the sheer size of Indian armies, masters at sea was both technological superiority as well as a tenacity for simply harassing people till they fell in line, often out of sheer exhaustion if not fear.

Moxham relies greatly on contemporary accounts, though not from the Indian side, which would have been more of a handicap were he not concerned primarily with the Europeans and that slant. These accounts are also particularly interesting for painting a picture of life in the enclaves where Europeans settled, changing India in big ways and small. With the Portuguese came chillies to the subcontinent along with half a dozen fruits. Even the marigold, now an integral ingredient in ‘traditional’ Hindu worship, has its origins in Mexico. So too Moxham records details on a few other subjects—a slave boy in Bombay sold for the price of a parcel of stockings, and Surat stank ‘for want of privies’ and by its residents ‘making every door a dunghill’. Clearly, open defecation was a problem that vexed even 17th century India.

The big twist in the tale is the modest beginnings of the English, nothing about whom suggested they would prevail over their more rowdy competitors. The manner in which Moxham tells this is undramatic and logical. The policy of the English was clear in the counsel their first ambassador, Sir Thomas Roe, gave his East India Company bosses: ‘If you will profit, seek it at sea, and in quiet trade… it is an error to affect garrisons and land wars in India.’ This was an effective strategy— while the Portuguese and Dutch waged expensive campaigns against Indians and each other over ports and fortresses, the English found that £100 of goods from India fetched three times the price in the Far East and could then be sold in London for £900. This commercial incentive as well as the intelligence that were he to choose, the Mughal Emperor ‘had men enough to have eaten all the Company’s servants for a breakfast’, taught the English to behave. And this is what they did, cornering the largest share of European trade with India.

SO THE ENGLISH began more innocently than their violent predecessors, and for that reason were more welcome. To Jehangir they presented, among other things, two mastiffs that so pleased His Majesty that they were allotted palanquins and servants wielding flywhisks. When an Englishman did seize a ship belonging to Aurangzeb with cargo worth five million rupees, the Company truthfully protested that it was the doing of an infamous pirate and not an official. To Indian merchants too, they were more tolerable, and Moxham makes a revealing point when he notes that were it not for help from local Gujarati bankers, the English would have shut shop in India very early in the day—the Company in 1669 owed 400,000 rupees to one creditor in Surat alone. Add to this the fact that while the Dutch and, before them, the Portuguese persecuted ordinary Indians, the English gave residents of their towns in Bombay and Madras the freedom of religion and other liberties, making the idea of business with the Company more inviting than with the alternatives.

What then turned the Company into a colonising force, Moxham tells in one of the more instructive parts of the book, was their national rivalry with the French. In the 18th century, the threat of French domination of peninsular India was real, and the Emperor—by now incapable of feasting on large numbers of Europeans due to advanced political impotence—had created the head of Pondicherry a Nawab. As the Dutch too disappeared from India, the contest became one between the French and the English. Wars followed, and even Madras—which Moxham endearingly describes as having ‘a reputation for loose morals and drunkenness’—was lost to the French. Interestingly, it was also the French, a decade before better-known Plassey, who demonstrated for the first time the capacity of well-trained Western armies to defeat numerically superior Indian forces. After that, once-cautious traders were no longer inhibited in challenging potentates of the interior.

In 1749, peace settled in Europe forced peace in India. Madras was returned to the English, but both sides discovered that suddenly they possessed costly armies that were raised in the course of the previous years. This corresponded with the implosion of the Mughal Empire, with the result that both parties began to loan out their men and weapons to rival power centres that rose across the land—Hyderabad, Arcot, and so on—gaining insidious influence over local affairs, and creeping from the coast into territorial India.

The rest, as Moxham concludes in this satisfying book, is well known.