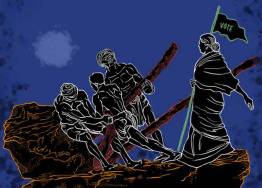 In 1892, during his tour of the coast, Swami Vivekananda famously proclaimed Kerala a “lunatic asylum” of caste. He withdrew in horror, so it took Malayalis many more generations to grow fully embarrassed of the social brutalities that earned them this shameful distinction.

As late as the 1930s, landlords in Alappuzha, for instance, claimed jurisdictional rights over the lives of Dalit workmen. One of their ‘privileges’ was to prohibit dignified identities to serfs, who were only named ‘Velumbi’ (‘White One’), ‘Karumban’ (‘Dark One’), ‘Chaathan’ (‘The Devil’) or whatever else came to the lips of the incumbent master when he was informed of a birth in their hovels. (And these were necessarily ‘hovels’— the word ‘house’ was forbidden because language too was stratified. No wonder Alappuzha became an engine of the Communist movement.)

By the time Narayani was born in the 1960s, however, much had changed. Her father, a devoted Communist born in the labouring Pulaya caste, was determined to give his children ‘good’ names. One of them became a Mahadevan, while Narayani’s sister is called Mahalakshmi. These elaborate Hindu names were chosen not out of faith in gods and goddesses but as an assertion of equality with upper-caste communities.

Narayani’s father remained a committed atheist and their house was plastered with pictures of E.M.S. Namboodiripad and stocked with Marxist literature — books his children absorbed when they were not joining him at political meetings. Both the sons were active in the party till they met electoral defeat, so eventually it fell upon their sister to succeed.

I was in my teens when I first met Narayani who was then the latest in a succession of helps employed by my grandmother. She was endlessly curious and we struck up a conversation about my camera, while she deboned fish. It was eventually decided that I should take photographs of her family, and she arrived on the appointed morning with her boys — her husband, she announced, lacked the requisite ‘personality’ to feature in a frame. Her solidly starched sari only amplified Narayani’s own presence, but I wasn’t prepared for the glasses she had suddenly acquired. “These photographs will last years,” she explained, “and I will not always be someone’s servant.”

My grandmother muttered that her maid had the pretensions of a professor but Narayani was unabashed about wearing her dignity on her nose.

As it happened, she earned more than just the borrowed dignity of facial accessories. She disappeared from our lives only to emerge a decade later as a candidate in the local elections. With 50 per cent seats reserved for women in the panchayat, and further reservations for backward communities, Narayani finally had an opportunity to do more than chop and clean.

Even back when we knew her, she was active with women’s movements and small community initiatives. It was this work that made her flee and hide if anyone who knew her in her public avatar happened to pass by while she swept the yard. But for all that, she says, “There was no question of electoral politics till reservations opened up a path.” Suddenly, Narayani was wooed by the Communists as well as by the Congress and the Bharatiya Janata Party (she used to read the Gita on loudspeakers at the local temple for Rs. 1,000, which to her did not materially erode her atheism even if it confused political parties in the area).

An SSLC-pass, Narayani is more resourceful than her husband, who does not stand in his wife’s way, and more optimistic about their life at the crossroads of aspiration, social mobility, and daily plodding. When she won the elections last year, though, she realised that the battle was less than half-fought. “Men can move around easily but I have to run a household as well as address the problems of my voters.”

She spends certain hours of the day in her office and the remaining time goes from house to house where she has business to attend; she acts as a liaison to obtain state benefits for the eligible, and ignores torrents of abuse from the ineligible; she helps people procure birth certificates and pensions and is amused that her appraisal depends on how well she handles individual concerns rather than wider public questions.

There are also snide comments about her caste, and men in her own party never cease to remind her that it was only reservation that allowed her this chance. “No matter how hard I work, people still complain,” she remarks dryly. But Narayani has, in a matter of months, developed a thick skin and learnt to negotiate her way — the last time a party leader “reminded” her how much she “owed” them, she submitted a polite letter of resignation. The old man quickly apologised and asked her “not to let down our party workers”. Yet, things are not easy. She earns Rs. 7,000 as panchayat member, of which 30 per cent is “donated” to the party. Her husband cannot find employment, and while her sons support her politics, “this is only because I wake up at 5 a.m. and get all the housework done — if my work got in the way of their meals, they’d be less supportive!”

She wants her children to move up the ladder — one is an engineer facing the swollen ranks of the unemployed. “He could get something less grand and make money,” she says, “but I have enrolled him for an advanced course. Why should he compromise?”

I last met Narayani in January outside the village office. She appeared unexpectedly to say hello, and I suggested that perhaps we should take a photograph together. But quickly a crowd gathered around “Madam” and I retreated. For Narayani, the horizons are broader than they were 10 years ago, and there is no novelty in photographs — her face appears on every party poster and leaflet and her eyes are now set on the chair of the panchayat president.

(Narayani’s real name has been concealed.)